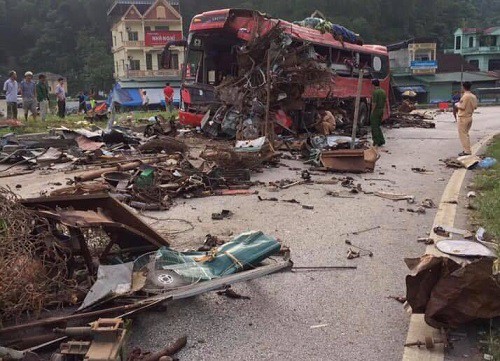 Three people were killed and nearly 40 others injured after a truck collided with a passenger bus in the northern Vietnamese province of Hoa Binh on early Monday morning.

Preliminary information showed that the accident happened along a section of National Highway 6 in Dong Bang Commune, Mai Chau District at 00:20 am.

The truck carrying scrap metals was traveling toward Hanoi when it crashed into the 40-seater sleeper bus running in the opposite direction.

The driver of the passenger bus, 45-year-old Cao Xuan Hong, was killed on the spot and stuck inside the cabin, while two other people on his vehicle succumbed to their wounds on the way to the hospital.

Thirty-seven others passengers were injured, with victims with the most severe injuries already transferred to a hospital in Hanoi for further treatment, according to the An Toan Giao Thong (Traffic Safety), a website run by Vietnam’s National Steering Committee for Traffic Safety.

Local residents had to crack open the windows of the sleeper bus to bring them outside.

At the scene of the accident, the sleeper bus was heavily distorted, while the truck was also damaged and knocked on its side.

Officers are investigating the cause of the collision.