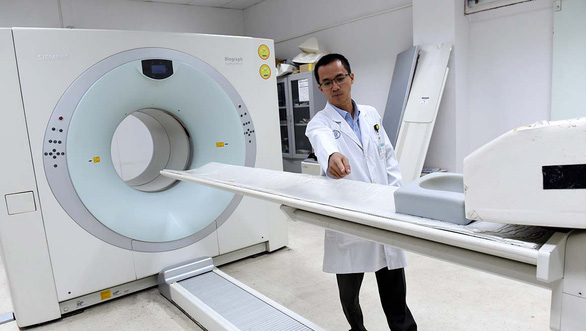 Cancer patients in Ho Chi Minh City are now required to travel a long way to receive PET/CT scans, as the city’s only machine capable of producing the radioactive substance needed for the scans has been out of order for over a month.

PET/CT scans are able to produce full-body images of a patient in order to indentify growths which may have been previously overlooked or are difficult to characterize by conventional CT, X-Ray, or MRI.

They are considered essential in the diagnosis and treatment of many early-stage cancers.

For PET scans to work, however, patients must be injected with fluorodeoxyglucose (FDG), a radioactive molecule that is similar to glucose.

Of the three hospitals, only Cho Ray has a facility capable of producing FDG.

For the last month, however, that facility has been out of order.

In the meantime, patients in the southern metropolis have had to travel to the central city of Da Nang or Hanoi, located 1,000km and 1,700km apart, respectively, to undergo the process, sending their medical costs soaring.

N.M.A., a resident in District 7, Ho Chi Minh City, said he recently took his 62-year-old father to Hanoi to undergo PET/CT scanning as part of his treatment for esophageal cancer.

Doctors previously discovered that the cancer had spread to another body part, thus necessitating PET/CT scanning in order to find the new location of the tumor, A. elaborated.

“My father was required to have his liver and kidney functions tested on our first day in Hanoi,” the man recalled.

“The scan was carried out on the second day and the result came two days later.”

The cost of the PET/CT scan alone was VND26.7 million (US$1,148), A. said, adding that other expenses including flight tickets, accommodation, meals, and medical tests raised the total cost of the trip to nearly VND50 million ($2,150).

“Not many people can afford such a trip,” A. remarked. “Thus they have no choice but to wait until PET/CT scanning is available in Ho Chi Minh City again.”

He expressed his hope that authorities will be able to promptly find a solution to the issue.

According to Ho Van Trung, a senior doctor at the Ho Chi Minh City Oncology Hospital, results of the PET/CT scanning showed that A.’s father’s tumor had spread to his ribs and pelvic bone.

This means the patient can no longer be treated with radiotherapy and should undergo chemotherapy instead, Dr. Trung said.

PET/CT scanning plays a fundamental role in this type of treatment, he continued.

Given the current situation, the patient may not be able to make regular trips to Hanoi or Da Nang to undergo the scan due to extremely high cost, Dr. Trung elaborated, adding that the expenditure is not covered by health insurance.

The only alternative to PET/CT scanning is conventional CT.

This type of treatment, however, requires the patient to undergo both radiotherapy and chemotherapy at the same time, which can be too much for his body to handle, the doctor explained.

Not only did the FDG machine in Cho Ray break down, but its entire PET/CT scanning system is also out of order.

Employees of the hospital now tell their patients that the system is undergoing a massive maintenance operation which is not expected to be finished within the next month.

Tuoi Tre (Youth) newspaper reporters arrived at the facility on Tuesday and were shown around by Dr. Nguyen Xuan Canh, head of the department of nuclear medicine.

According to Dr. Canh, 100 to 150 patients sign up for PET/CT scanning at the infirmary every month.

“After the machine broke down, we began advising them to go to hospitals in Hanoi and Da Nang, or take other alternatives such as regular CT, X-Ray, or MRI scans,” he stated.

PET/CT scanning, however, is still the best choice in many cases, he remarked.

Nguyen Tan Chau, an engineer at Cho Ray, said they are waiting for a response from American manufacturers regarding the technical error.

Meanwhile, Phan Van Bau, director of the Nhan Dan 115 Hospital, hopes the municipal People’s Committee and the Department of Health will consider investing in a new FDG machine to meet rising demands.