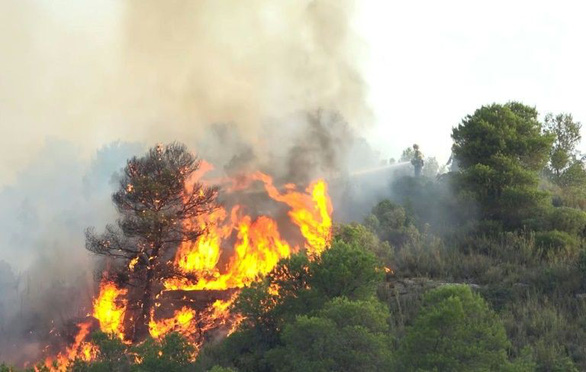 Although authorities have been able to put out multiple wildfires that broke out in many north-central Vietnamese provinces over the weekend, the risk of such natural disasters remains very high in the region due to the hot and dry weather.

As of the end of Sunday, all of the fires have been put under control thanks to the relentless efforts of firefighting police, military soldiers, forest protection officers, and local residents.

The most serious wildfire occurred at a pine tree forest in Nghi Xuan District, Ha Tinh, as it had been raging for over three days before being extinguished.

Thousands of people were mobilized to contain the inferno, while many residents living in nearby areas had to evacuate for their own safety.

The fire in Nghi Xuan started at around 1:00 am on Friday, after a local resident purportedly burned garbage and caused the flames to spread to the forest.

Forest fires also erupted in Huong Son, Hong Linh, and Cam Xuyen Districts in Ha Tinh during the period, resulting in more than 200 hectares of forests burned down in total, according to the provincial chairman Dang Quoc Khanh.

During his trip to Nghi Xuan on Sunday, Deputy Prime Minister Vuong Dinh Hue praised the efforts of local authorities and residents.

He called on competent agencies to continue monitoring the situation, as wildfires can easily break out given the current weather pattern.

It was put under control on the same day thanks to early detection, but authorities are taking measures to prevent the flame from flaring up again.

Authorities in Nam Dan District, Nghe An Province also confirmed that about 20 hectares of local forests were destroyed by a fire on Saturday and Sunday.

A 55-year-old woman lost her life while taking part in the effort to put out the flames, local authorities stated.

In Thua Thien-Hue Province, over 100 hectares of forests were destroyed after wildfires broke out at four different locations on Friday afternoon.

According to the National Center for Hydro-meteorological Forecasting, it will remain blistering in north-central Vietnam on Monday, with the highest temperature exceeding 38 degrees Celsius.

Although rain may fall in some areas in the evening, the weather pattern still poses a high risk of wildfires.

The situation is expected to improve between July 2 and 4, as more downpours are in the forecast.