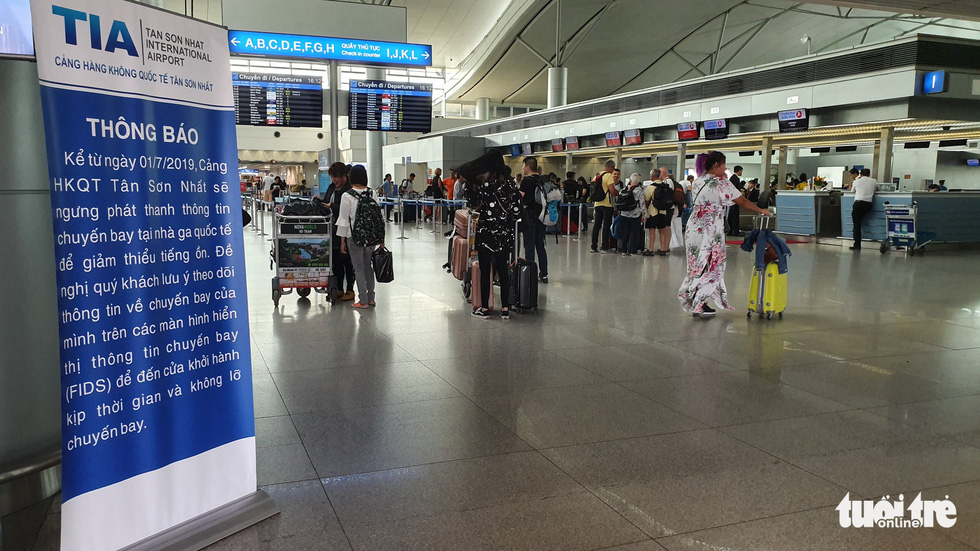 Sunday was the last day when announcements were made through the loudspeaker system at Tan Son Nhat International Airport, with passengers expressing both support and concerns for the new rule that has switched the Ho Chi Minh City airdrome to ‘silent mode’ from July 1.

Tan Son Nhat no longer makes announcements such as final calls for boarding and flight status changes, as well as paging specific passengers who are about to miss their flights, over the public address system.

The only announcement to be made via the loudspeaker system is gate change.

The change took effect from Monday at the airport’s international terminal, and will be applicable to the domestic one from October 1.

On Sunday, announcement boards reminding passengers of the above changes in both English and Vietnamese were placed near all gates and entrances of the international terminal.

Announcements regarding departure status and boarding time were still made at the airport, but the ‘last calls for passengers’ were no longer heard, as observed by Tuoi Tre (Youth) newspaper.

With the airport ‘going silent,’ passengers will have to watch the clock so as not to miss their flights, or pay attention to electronic display boards that show all flight information, including delays and cancelations.

Some passengers appeared to well embrace the changes, as they were seen carefully monitoring the information screens before checking in their luggage.

Pham Cong Khiem, a passenger from the Central Highlands city of Buon Ma Thuot, said he fully supports the changes as they will make the airport less noisy.

Khiem added that he believes it is a growing trend among major airports in the world to go silent, freeing passengers from constant announcements demanding their attention every few minutes.

However, the passenger also expressed his concerns that many Vietnamese are still not used to scrutinizing electronic display boards at the airport.

“I know many people prefer paying attention to the loudspeakers, waiting for their names to be called before heading to the boarding gate,” he shared.

It would be better if there were a transition phase enabling passengers to familiarize themselves with any change before it officially took effect, Khiem said.

Another passenger, Nguyen Ngoc Huyen Trang from Ho Chi Minh City, said it is inevitable that some people will miss important information regarding their flights as the display boards at the airport are too small.

In order to support passengers in adapting to the change, the airport management have installed Veripax, a system letting passengers know whether they need to return to check-in counters for their luggage, as well as new display boards to make it easier for them to follow their flight's status.

In addition, attendants of the airport and airlines are required to keep information on the screens constantly updated.