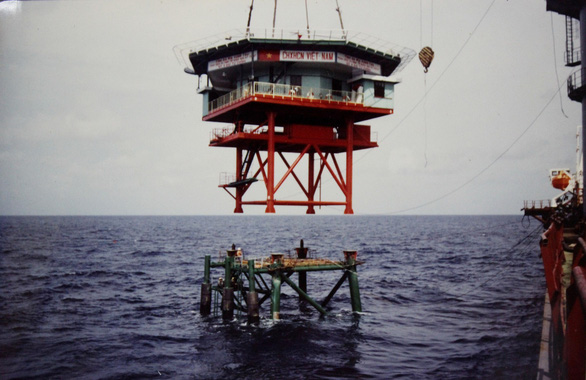 Vietnam launched an unprecedented project 30 years ago to plant about two dozen steel structures the Vietnamese call "ocean fortresses" in the East Vietnam Sea that serve as service stations for Vietnamese naval soldiers who exercise the country’s sovereignty at sea.

The DK1 platforms, formally the “economic, scientific and technological service stations," were established under an executive order issued on July 5, 1989 by Do Muoi, then-sitting Chairman of the Council of Ministers, the country’s premier.

It was Vietnam’s stern response to China’s elevated aggression in the East Vietnam Sea the previous years, marked by the Chinese invasion of Gac Ma (Johnson South) Reef, which is part of Vietnam’s Truong Sa (Spratly) archipelago off the coast of Khanh Hoa Province, on March 14, 1988.

The rigs are a collection of 20 structures of large steel pipes built upon reefs near the Truong Sa islands.

It was considered an architectural feast for Vietnam at the time, when resources were scarce and all calculations of the rigs’ locations had to be done manually without any GPS equipment.

“On the outside, they looked just like any oil rigs that many other countries had built at sea for petroleum extraction,” said Pham Ngoc Nam, a former army engineer who helped design some of the DK1 stations.

“The biggest difference was that we were able to build our rigs upon such unstable foundations as coral rocks and muddy seabeds.”

Moreover, DK1 are much smaller in size compared to oil platforms, making them more vulnerable to harsh weather conditions.

“Yet the DK1 rigs still stand strong after three decades and have become the milestones of Vietnam’s maritime sovereignty,” Nam said.

“We have not seen any other successful attempt to build similar structures on coral rocks in the region or the world.”

In 2009, on the project’s 20th anniversary, a campaign backed by Tuoi Tre (Youth) newspaper raised money from thousands of donors to install solar panels and wind turbines on the DK1 rigs, providing a reliable source of power for the structures.

As of today, all rigs in the DK1 system have been upgraded into a new generation with better and more modern equipment, turning them into formidable “ocean fortresses” capable of defending Vietnam’s maritime territory against any foreign force.