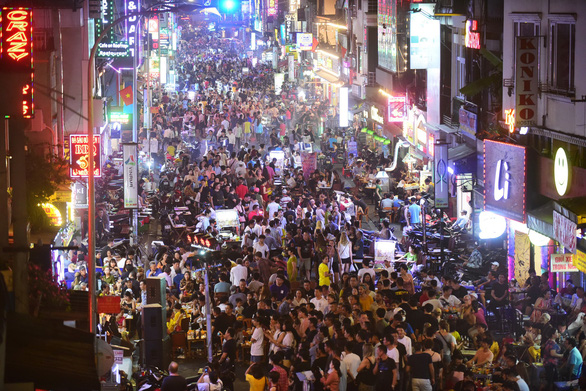 Vietnam is looking to tap into the enormous economic potential of its nightlife as Hanoi urges studying of policies to promote the nighttime economy being implemented by its northern neighbor China.

In a directive issued on Friday, the Office of the Vietnamese Government requested that ministries and local administrations study Beijing’s policies to promote its nighttime economy and make reports to the prime minister.

The nighttime economy describes economic activities taking place in the evening after many people finish daytime employment or formal education.

The Chinese government has since the beginning of 2018 imposed a range of policies to promote the country’s nighttime economy taking place between 8:00 pm and 6:00 am.

Ten night food streets, 16 nocturnal markets and 24-hour convenience stores in Beijing have become the first to receive a government subsidy to operate late at night.

On July 19, Beijing extended the running hours of its two main subway lines on weekends, requiring the last train to depart after 12:00 am every Friday and Saturday, according to the Chinese state-run Xinhua News Agency.

The capital city's sub-center of Tongzhou District is looking to develop late-night cafeterias along the key subway lines and in administrative office areas, and encourage the building of 24-hour convenience stores, bookstores, chemists and movie theaters, Xinhua reports.

Shijiazhuang, the capital city of Hebei Province in northern China, has lowered the electricity price for stores extending running hours at night.

Such policies are being imposed across the world’s second-largest economy as China looks for alternative growth drivers to neutralize economic impacts of its ongoing trade war with the U.S.

Results have been uplifting. China's night catering consumption jumped 47 percent in 2018 from a year earlier, two percentage points higher than the daytime growth, according to a report released by the China Tourism Academy and Meituan, a Yelp-like Chinese online city guide.

Young people were the largest contributors to nighttime consumption in China, with consumption value and volume of tourists born post-1980 accounting for more than 40 percent of the total during the May Day holiday, a report by the China UnionPay Merchant Services Co., Ltd. showed.

A model for Vietnam

In Vietnam, a nighttime economy has already taken shape in major cities like Ho Chi Minh City and Hanoi, where pedestrian-only quarters, food streets, night markets and an extensive network of more than 2,300 convenience stores have lit up the cities’ night skies for years.

At the moment, Vietnam’s tourist products are focused on daytime activities taking place between 7:00 am and 5:00 pm, while the period from 6:00 pm until 2:00 am the next day are left under-invested, said Nguyen Quoc Ky, general director of Vietravel, a leading Vietnamese tour operator.

It is at night that tourists tend to spend the most money, as 70 percent of Vietnam’s tourism revenue comes from nighttime activities and services, Ky said, citing a report.

“All the fun activities in Nha Trang take place during the day while not so many are available at night,” said Maria Ekaterina, a Russian visitor to the south-central Vietnamese city.

“We don’t have many options except some bars and clubs that often only open until 1:00 or 2:00 in the morning.”

But careful planning and monitoring is necessary to avoid the negative impacts of nightlife, Ky warned.

“Meanwhile, the city’s Nguyen Hue Walking Street lacks cultural activities and is plagued by street vendors and littering, which is a shame.”

“This is a rather uncharted territory [for Vietnam] and we will be conducting surveys and studies in this field to introduce suitable support policies,” Lam said.