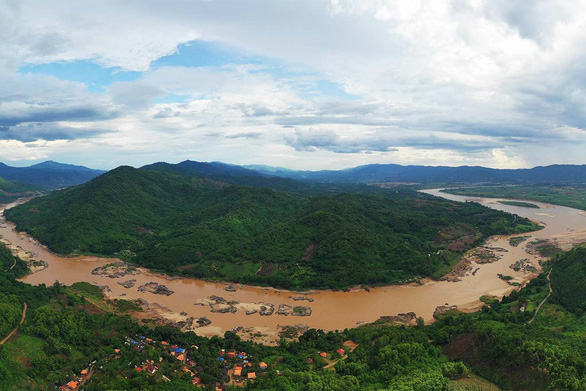 The Mekong River’s water level during this year’s early flood season, from June to July, is among the lowest on record, according to the Mekong River Commission (MRC), with experts warning of impending consequences on the upcoming dry season in Vietnam.

Water levels in the Mekong River recorded in Thailand, Laos, and Cambodia are all below the previous record low recorded in 1992, MRC said in a report on July 18.

The Mekong is a trans-boundary river in Southeast Asia, formed in the Tibetan Plateau, which courses through China's Yunnan Province, Myanmar, Laos, Thailand, Cambodia, and Vietnam before discharging into the East Vietnam Sea.

The water level in Thailand’s Chiang Saen District was 2.10 meters as of the time of the report, 3.02m lower than its long-term average measured over 57 years (1961-2018) and about 0.75m lower than the minimum level ever logged.

In Vientiane, the capital city of Laos, the Mekong River waters were just 0.70m on July 18, 5.54m below its long-term average over the same period and about 1.36m lower than the minimum level.

The water in Cambodia’s Kratie Province measured 9.31m deep, about 5.40m below its long-term average but 0.16m higher than the minimum level on record.

The MRC says the relatively rapid and sustained decrease in water levels and discharge from the Mekong River in June and July 2019 is unprecedented and does not reflect the natural recession of seasonal flows.

During this period of the year, the Mekong water should be slowly increasing, according to the MRC.

Deficient rainfall and drier-than-average weather conditions are some of the key factors that have contributed to the current state of what is described as the “regional low flow” of the Mekong river basin, according to the MRC.

However, the situation is expected to improve at the end of July with rain in the forecast, the commission noted.

The MRC, established by Vietnam, Thailand, Laos, and Cambodia in 1995, is an intergovernmental organization for managing and coordinating the use and care of the Mekong River. China and Myanmar are also included in the commission as “dialogue partners."

The six countries now work together in a cooperative framework.

The MRC report also mentioned the activities of the Jinghong dam in China’s Yunnan Province as a potential contributor to the Mekong’s low flow.

Eight Chinese dams built on the Mekong, or Lancang as it is called in China, have the capacity to block a combined total of over 40 billion cubic meters of water for use in electricity generation, irrigation and other purposes, according to a report on Thai PBS World, which cited numbers from Mekong Butterfly, a civic group that studies the impacts of dams constructed along the Mekong River.

The sudden sharp drop in water levels in the Mekong was also blamed on the retention of water in the reservoir behind the Xayaburi dam in Laos from July 9 in preparation for the country’s trial run of seven electricity generators between July 17 and 29, the news site reported.

The 1,260-megawatt Xayaburi dam, located just south of Luang Prabang in Xayaburi Province, is scheduled to begin churning out electricity this October, with the Electricity Generating Authority of Thailand (Egat) as its primary customer.

Loei Province in northeastern Thailand has seen the Mekong water level drop to a 57-year low since the Xayaburi dam began retaining water, according to Bangkok Post.

“The water level was so low we could easily see through to the river bed,” Thien said.

“Only small boats could travel on the [Mekong] River, and I overheard a Thai guide telling a Chinese tourist ‘mei you shui’ [no water] when describing the river’s situation,” she said.

“Hydropower plants don’t take away a river’s water; they only retain and discharge the water to generate power, so the overall amount of water stays the same,” said Nguyen Huu Thien, an independent expert on Mekong Delta ecology.

“It is the river flow that’s affected."

Large hydropower plants with their own reservoirs can help retain water during rainy seasons and discharge water during dry seasons, which helps mitigate flooding and drought in downstream areas, according to the Vietnamese expert.

However, during years with extreme weather conditions hydropower stations can be a double-edged sword, worsening environmental impacts on the environment.

When there is too much rain, for example, these plants have to make an emergency discharge to avoid dam failure, which adds to the flooding in downstream areas.

When there is a severe drought, hydropower stations need to retain enough water to maintain operations, which deprives downstream areas of the much-needed resource.

“We are currently going through an El Nino phase that causes lack of rain and is expected to last for another two months, according to a July 15 report by the U.S. National Oceanic and Atmospheric Administration,” Thien said.

“All these hydropower dams are only worsening the situation."

All signs are pointing to a historically low flood season in Vietnam this year, said Dr. Le Anh Tuan from Can Tho University, located in the namesake city of Vietnam’s Mekong Delta region.

“If agriculture and environment authorities don’t issue official instructions and have plans for water retention right now, the upcoming dry season will become much worse,” he warned.