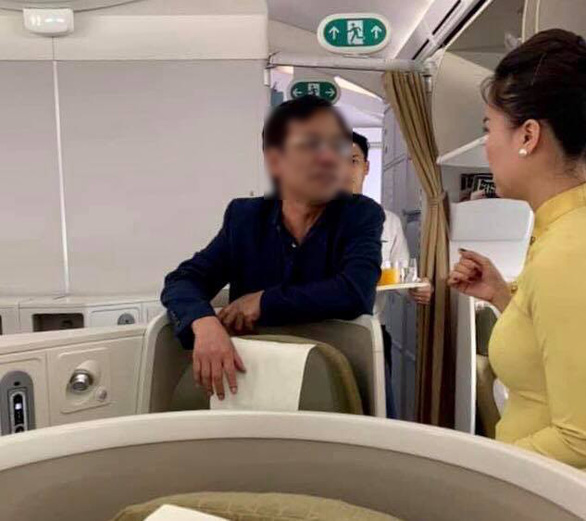 A Vietnamese businessman has been handed a VND10 million (US$430) fine for groping a female passenger and an air stewardess on a Hanoi-Ho Chi Minh City flight last week.

Vu Anh Cuong attended a working session to clarify the incident on Wednesday afternoon after being summoned by the Northern Airports Authority, Tran Hoai Phuong, the agency’s director, confirmed.

The man admitted to his inappropriate actions toward a female passenger and a female flight attendant on flight VN253 operated by Vietnam Airlines on Friday afternoon.

The Northern Airports Authority concluded that Cuong’s actions and words were offensive to the two women but were not serious enough to warrant criminal charges.

The agency imposed a VND10 million fine on Cuong in accordance with Government Decree No. 162, which outlines the guidelines on administrative penalties in civil aviation.

At the working session, Cuong said that he had already offered a direct apology to the female passenger and her family, as well as extended his apologies to Vietnam Airlines, the flight attendant, and other passengers on the flight.

He also claimed that his actions were caused by a combination of work stress and alcohol.

According to preliminary information collected during the investigation, Cuong was already drunk when he boarded the flight at Noi Bai International Airport in Hanoi.

As the plane was preparing for take-off, Cuong groped a female passenger before sexually harassing a female flight attendant, according to a report made by the flight crew.

The flight crew then asked Cuong to leave the aircraft as he was under the influence of alcohol and unable to control his behavior.

Dinh Viet Thang, head of the Civil Aviation Authority of Vietnam (CAAV), previously told Tuoi Tre (Youth) newspaper that a temporary flight ban would be imposed upon Cuong if he was found guilty.

Local media outlets have reported that Cuong is a real estate businessman.