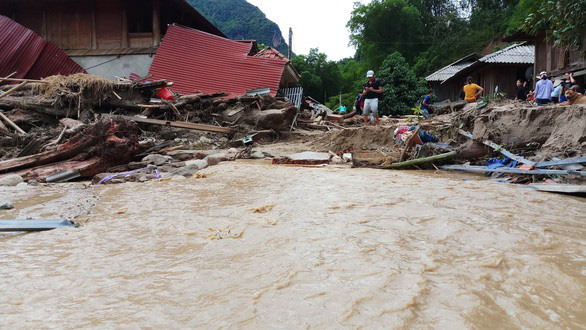 The number of people killed in Tropical Storm Wipha has soared to nine, while 11 others have gone missing in northern and north-central Vietnam.

Wipha, which is Vietnam’s third storm this year, has claimed five lives in north-central Thanh Hoa Province, while the four other deceased victims came from the northern provinces of Bac Kan, Dien Bien, Lao Cai, and Phu Tho, the central steering committee for disaster prevention reported on Monday.

About 300 houses in Thanh Hoa and northern Lang Son Province were also damaged.

Hundreds of officers have been mobilized to look for the missing as well as to deal with the consequences left by the storm.

Initial reports said at least two people lost their lives in the tropical storm that made landfall on northern Vietnam on Friday night.

Even though the typhoon then weakened into a tropical depression, its circulation brought heavy downpours which triggered flashfloods and landslides in many locations across the northern and north-central regions.

Many people could only ensure safety for themselves and their children, while their homes and assets were swept away by floodwaters.

All of the ten missing victims in Thanh Hoa are Xa Na villagers, five of whom are members of a family. According to local authorities, 34 out of 74 houses in the village were either washed away or knocked down by the flashflood.

According to the National Center for Hydro-meteorological Forecasting, it will continue raining in northern Vietnam, as well as Thanh Hoa and Nghe An Provinces in the north-central region on Tuesday.

In southern provinces, the monsoon is forecast to cause downpours from August 6 to 9.

A low-pressure zone in the East Vietnam Sea will also cause rough seas, rains, and thunderstorms along the southern Vietnamese coastline.