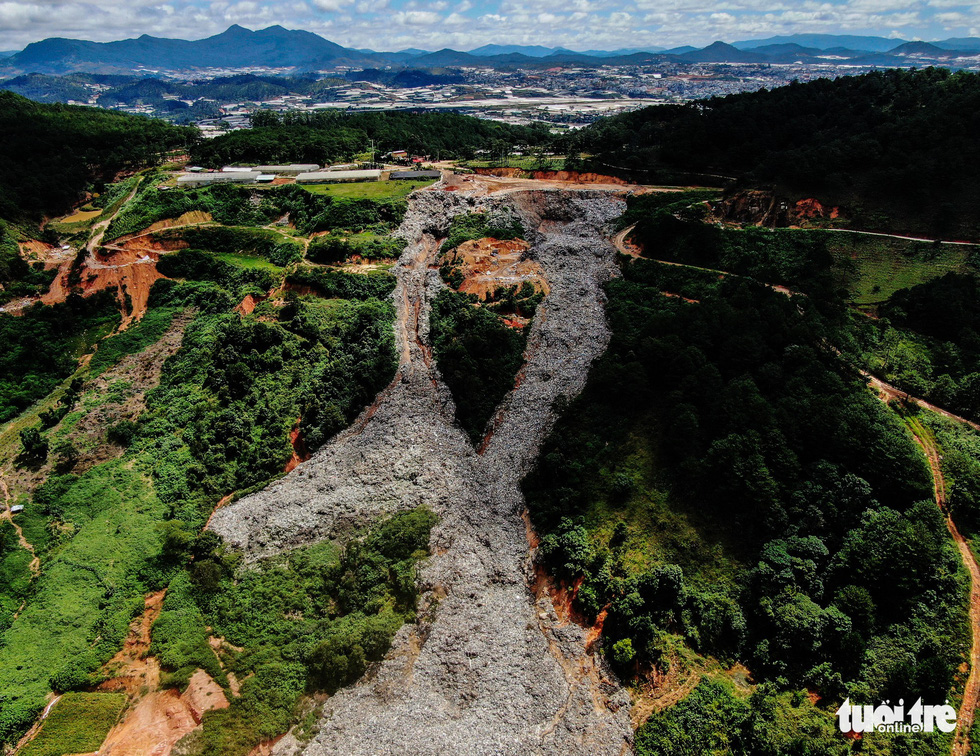 While it has been a week since heavy rain washed garbage from a landfill down a hill into a farming zone in the Central Highlands city of Da Lat, local authorities have yet to come up with a thorough solution to damage caused by the ‘trash slide.’

The incident occurred on August 8, when a large amount of waste from the Cam Ly landfill, located on a 60-meter-high hill in Ward 5, came downhill and covered farms at a large agriculture production zone in the nearby valley in a thick layer of trash.

As of Thursday, one week after the ‘trash slide,’ apparently caused by a prolonged downpour that hit Da Lat and many other areas in the Central Highlands last week, the situation remained unchanged, according to the observation of Tuoi Tre (Youth) newspaper.

Most of the garbage at the Cam Ly dump site was washed downhill, affecting farms growing vegetables and flowers in the valley.

Some residents also live in the agriculture production zone.

According to the Da Lat Urban Services JSC, which operates the landfill, the incident affected approximately seven hectares of farms.

Located about five kilometers from the city center, the Cam Ly dumping ground was previously closed in 2015, when a waste treatment plant in Xuan Truong Commune was put into operation.

The treatment plant had since received all of Da Lat’s garbage until it became overloaded in 2017.

In order to solve the problem, the Cam Ly landfill was reopened and has since been receiving about 200 metric tons of the city’s trash on a daily basis.

The garbage is then treated with lime and buried at the venue.

This is not a proper waste treatment method, the municipal administration has admitted following the ‘trash slide.'

City administrators added that Cam Ly only functions as a temporary landfill when the city’s primary waste treatment plant is facing issues.

Local officials said earlier this week that they were calculating the damage to come up with a way to compensate the affected residents.

The Da Lat Urban Services JSC is expected to build stronger and higher walls at Cam Ly to prevent similar’ trash slides’ in the future.