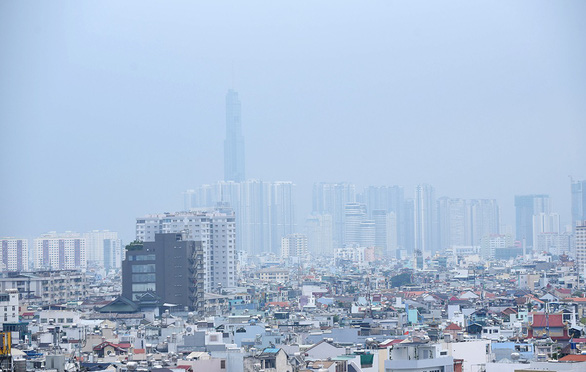 Thick fog that has blanketed Ho Chi Minh City since last week is leaving people wondering whether the southern Vietnamese metropolis suffers from smog, a kind of air pollution, as the municipal environment department has yet to either confirm or deny the speculation.

It has been foggy in Ho Chi Minh City for nearly a week, with weather experts attributing the phenomenon to a combination of high humidity brought about by continuous rain and dust particles.

Meanwhile, many people believe the city has been shrouded in smog caused by widespread forest fires in Indonesia.

Concern over air pollution skyrocketed on Monday after Air Quality Index (AQI) in the southern metropolis hit 128, according to Air Visual, an air quality tracking website.

As of Tuesday morning, AQI in Ho Chi Minh City topped 152 in some areas.

An AQI between 101 and 200 is considered unhealthy, especially for sensitive groups, namely children and the elderly.

The level of PM2.5 concentration, or atmospheric particulate matter (PM) that has a diameter of less than 2.5 micrometers, in Ho Chi Minh City also reached 35µg per cubic meter, while the recommended level is only 10 µg per cubic meter.

PM2.5, also known as fine dust, is the most dangerous contaminant to human health, as it can easily enter deep into the human body due to its microscopic size and causes such problems as irritation of the eyes, nose, throat and lungs, as well as coughing, sneezing, and respiratory diseases.

According to Ho Quoc Bang, an environmental expert from the Vietnam National University-Ho Chi Minh City, air pollution in the metropolis and other southern localities have been quite serious and may be harmful to human health.

There are three causes of the smog hitting Ho Chi Minh City over the past days, Bang told Tuoi Tre (Youth) newspaper, adding that the Indonesian forest fires are the primary cause.

The other two are high humidity and pollutants coming from transport, industrial and daily life activities, he added.

Bang underlined that this is just a personal opinion based on his own assessment.

While an official statement from the municipal Department of Natural Resources and Environment is expected in situations like this, the state body has remained silent since the very first day of fog.

Tuoi Tre contacted an official from the department for an inquiry on the issue on Monday and was told that there were not enough grounds to make a conclusion.

In the meantime, Vietnam’s southern weather forecast station also confirmed it does not have enough data to prove whether or not the forest fires in Indonesia resulted in smog in Ho Chi Minh City.

Air pollution in Hanoi has also become alarming in the past days, with AQI in the capital reaching up to 171 on Tuesday morning.

The Hanoi Division of Environmental Protection attributed the problem to exhaust discharge by traffic and construction activities, along with contaminants from other places.