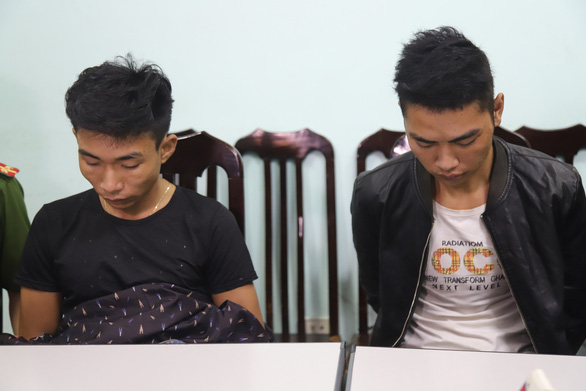 A GrabBike driver had had an intuitive feeling that the two passengers he was going to carry could do something harmful to him, so he decided to take a photo of them, before he was indeed murdered and the picture became an important lead for police investigation.

Police in Hanoi said late Monday they had arrested two men for allegedly stabbing the GrabBike driver, Nguyen Cao S., to death last week, using the photo the victim had taken of the suspects and sent to a friend of his before the deadly ride.

Dinh Van Truong, 19, and Dinh Van Giap, 24, were apprehended when they were hiding in the northern province of Yen Bai, about 155 kilometers from Hanoi, where the alleged murder took place, at around 6:00 pm on Monday.

The men were brought back to Bac Tu Liem District in the capital to assist the investigation, an official from the Hanoi police department told Tuoi Tre (Youth) newspaper.

Truong and Giap are the prime suspects in the murder of S., an 18-year-old college freshman who worked after school as a GrabBike driver in Hanoi.

Police reports showed that the incident happened in Thuy Phuong Ward, Bac Tu Liem District on the night of September 26.

Before picking up Truong and Giap, S. had taken a photo of them and sent it to his roommate, Long, asking him give it to police officers “if anything bad happens.”

Long told officers he had tried to call S. multiple times later that night, but his roommate never answered.

S.’s family then reported his missing to police, before his body was found in a secluded area in Bac Tu Liem District on the evening of September 28.

As the student showed signs of being murdered, a manhunt was later initiated for the suspects based on the photo the victim had sent his friend.

According to Giap’s statements, he and Truong booked a ride from My Dinh Bus Station to Co Nhue Ward that day.

In the middle of the journey, Giap told S. that they did not have any money and asked if they could pay the fare on another day.

S. did not agree, before an argument broke out between Giap and the driver.

During the quarrel, S. threw Giap’s bag on the ground, so Giap stabbed him multiple times with a swift knife.

S. then ran away as he screamed for help.

Truong and Giap took his motorcycle and fled to their hometown in Yen Bai Province, but did not steal his smartphone.

Meanwhile, Truong claimed he was standing from a distance during the quarrel, thus he was not aware that Giap had stabbed the victim.

Both suspects said they did not know that S. had succumbed to the wounds.

They also had no idea police were hunting for them as they did not read the news.