Dozens of old villas in Ho Chi Minh City built during the French colonial period are up for conservation after the city tasked a team of experts with appraising these structures.

Eighty-two villas in total were reviewed by experts from the Ho Chi Minh City Institute for Development Studies under the scope of the conservation effort.

The buildings have been sorted into three categories based on their historical, cultural and architectural values.

Sixteen villas that are representative of the French era’s architecture and culture were classified into Category One, eligible for thorough conservation of their complete status quo.

All of these buildings are clustered around District 1 and District 3 - the historical center of Saigon, the former name of Ho Chi Minh City.

Another 49 villas fall into Category Two, which means they have high values that call for conservation of their exterior and overall structure.

The remaining 17 villas were not eligible for official conservation and were proposed to be disassembled for safety reasons.

Ho Chi Minh City is home to more than 1,300 villas built during the French colonial period, most of which are in a bad condition due to lack of conservation efforts.

Some of these buildings are more than a century old, embodying a fusion of Western and Vietnamese architecture that is highly valued by experts and researchers.

The French colonial period in Vietnam began in 1887 and lasted until 1954, with a break between 1941 and 1945 when the Japanese took over during World War 2.

Some of the notable French landmarks that still stand in the southern metropolis include the City Hall, the Saigon Central Post Office, and the Notre-Dame Cathedral Basilica of Saigon. 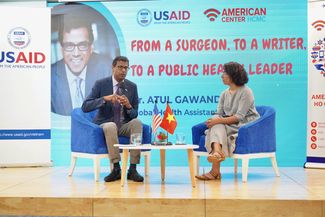 Atul Gawande: A journey from a surgeon to a writer and a public health leader

'The second part of the journey was that I came to live by a preset that I labeled: Say yes to everything before you're 40'

The performances were done by famous artists from Poland