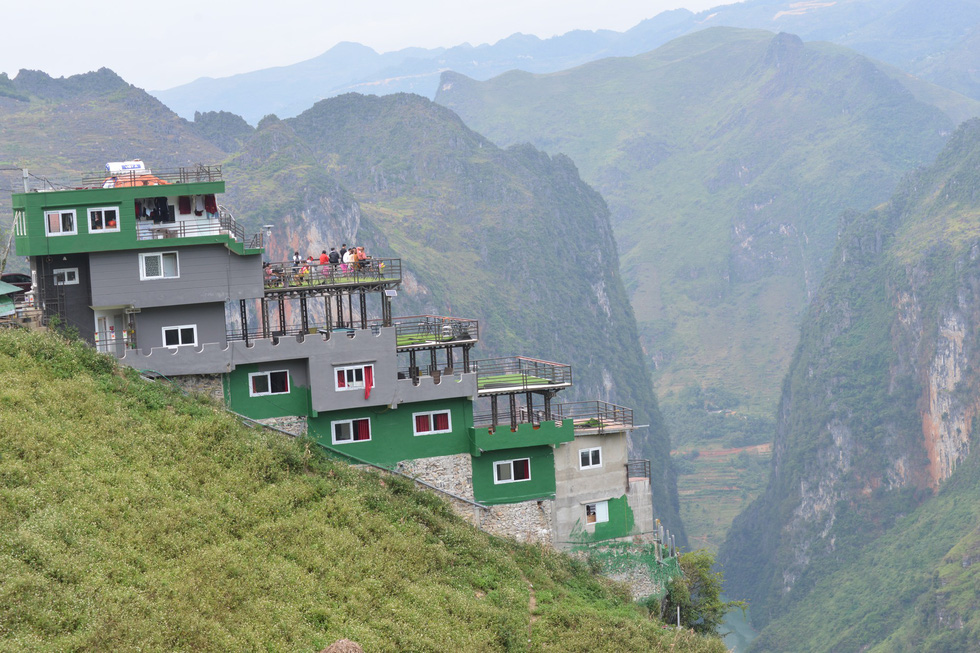 The owner of a building illegally constructed on the majestic Ma Pi Leng Mountain Pass in northern Vietnam has ‘coated’ the controversial venue with a new green color in an apparent attempt to allay criticism against its construction.

The exterior color of the Ma Pi Leng Panorama, a seven-story hotel, restaurant, and café situated on the highest point of the namesake pass in Meo Vac District, Ha Giang Province, has been changed as observed by Tuoi Tre (Youth) newspaper on Friday afternoon.

Construction of Ma Pi Leng Panorama began in late 2018, but the venue has only recently come under strong criticism from social media users in Vietnam following some media reports of its "ugliness".

They building has been described as an ‘eyesore’ on the majestic landscape, especially when information surfaced that it was built without a construction permit.

While the Department of Construction of Ha Giang has suggested that the hotel's owner destroy the six lower stories and keep the highest floor as an observation deck for travelers, some architects think it is better to pull down the top floor, which sticks out above road level, and renovate the bottom six in a way that makes the building blend in with its natural landscape.

Some online citizens also showed support for painting the venue with a new color so as to match it with the surroundings.

Ma Pi Leng Panorama’s owner apparently took in some of the Internet users’ suggestions and changed the color of the building’s highest story from orange to green.

Likewise, the fourth, fifth, and sixth floors have also turned green, while the seventh level is still in the middle of the transformation.

Answering Tuoi Tre’s questions about this transformation, Ma Van Cuong, vice chairman of Meo Vac District, said that the decision to paint the building with a new color is in the owner’s hands.

The district is still waiting for directions from the provincial authorities on what to do with the illegally-built project, Cuong said.

On Wednesday, the Vietnamese Department of Cultural Heritage under the Ministry of Culture, Sports, and Tourism conducted an inspection of Ma Pi Leng Panorama, but the authority has yet to produce an official statement.

As authorities ponder over what steps to take, the multiple-purpose building has had its seven hotel rooms fully booked until November, according to an attendant at the venue.

Although the owner has closed the five lower stories and kept services running only on the two top floors, customers still flock to the venue out of curiosity.

Many visitors are even willing to prepare meals by themselves, using the place's public kitchen, when the building's restaurant stops taking orders.