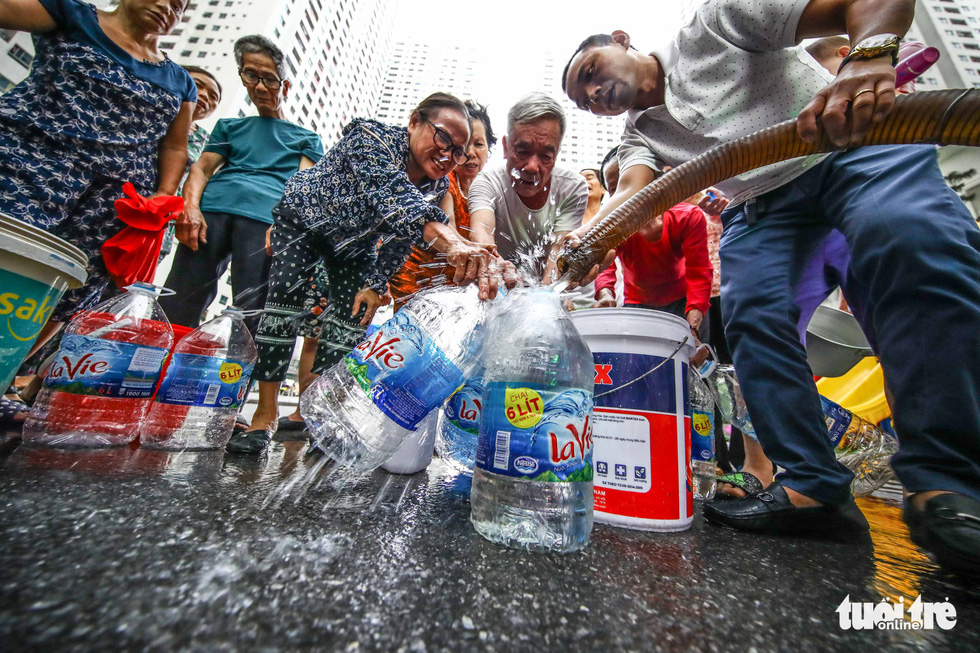 Residents in many neighborhoods of Hanoi had to queue up for long hours during the day and night on Wednesday and Thursday to receive fresh water after a local company cut off water supply to deal with an episode of polluted tap water that broke out last week.

In a letter sent to the municipal authorities and its customers, Viwasupco stated that the water cut is meant for the company to focus on cleansing its pipelines after its water source became polluted last week.

Affected residents said the tap water in their homes began smelling like chlorine and burnt plastic on Thursday last week.

After conducting an examination which included lab tests of water samples taken from these homes, local authorities announced on Tuesday that the concentration of styrene in the water “exceeds standards," without clarifying its health effects.

The pollution occurred after a truck reportedly dumped waste oil into a stream in Hoa Binh Province, about 60 kilometers west of Hanoi, on the night of October 8.

Due to a downpour later that night, the oil quickly spread to a nearby canal, which led water from the Da (Black) River into a water treatment plant of Viwasupco.

The firm had its employees remove the oil by skimming it but failed to report the oil spill to competent agencies.

Hoa Binh police officers have initiated a manhunt for the truck driver to assist the investigation.

Regarding the water cut, local water companies Viwaco and Hawaco have been mobilizing tanker trucks to bring fresh water to residential areas in the affected districts since Tuesday night.

Residents were seen making long lines as they carried empty bottles, buckets, and other types of containers to wait for their turn to receive the precious water.

The queues lasted well into the evening, despite a teeming rain.

Demands for bottled water also skyrocketed due to the water scarcity.

As of Thursday morning, many grocery and convenient stores in the affected Hanoi neighborhoods said that their bottled water products had sold out.

“We had to wake up early to purchase the products as they are usually out of stock in the afternoon,” said Anh Tho, a resident in Hoang Mai District.

Despite inflated prices brought about by the high demand, bottled water still sold like hotcakes in Hanoi, a store owner stated.

Viwasupco announced on Wednesday night that the water supply had resumed.

However, residents in the areas are still advised to refrain from using the tap water for cooking until authorities confirm that the water resource is completely safe, according to online newspaper VnExpress.