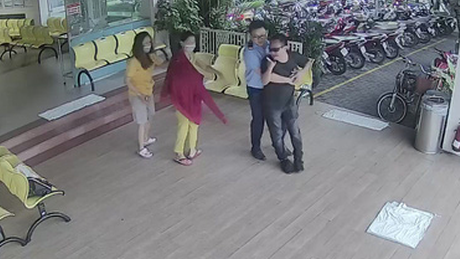 A car driver of Vietnamese ride-hailing app Be has had his account permanently suspended after being caught attacking a female passenger in Ho Chi Minh City earlier this week.

The incident occurred on the premises of the Mekong Obstetrics and Gynecology Hospital in Tan Binh District on the afternoon of November 11, a representative of the infirmary confirmed on Saturday.

The assault was caught on CCTV and the footage has recently gone viral on social media.

In the less than one minute video, the drive first argued with two women before he started punching and pulling the hair of one of them.

The other woman, who was holding a child, was not harmed.

A security guard quickly stopped the man, while another guard later came to protect the victim.

The guards also asked the driver to leave the venue and reported the situation to police in Ward 1, Tan Binh District.

According to Be Group’s representative, the firm has received a report on the case from a passenger named P..

P. stated she booked a ride from the hospital to Go Vap District at around 4:00 pm that day.

After arriving at the infirmary, the driver, N.X.T., noticed that the passenger was waiting at a different gate and asked her to cancel the ride via a phone call.

P. did not agree, before an argument broke out between the two.

T. later walked into the venue and continued arguing with the female passenger before attacking her.

Be Group has decided to permanently suspend T.’s account, which is the highest penalty in accordance with the firm’s policies.