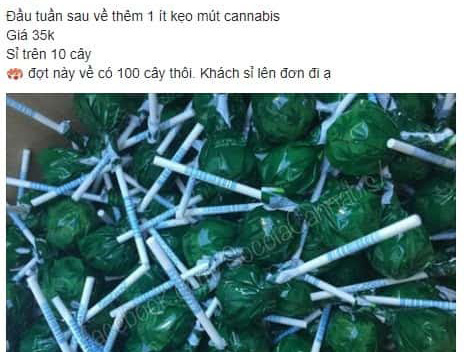 Various types of confectionery containing cannabis have been found being sold online in Vietnam, prompting competent authorities to tighten control over such products.

A lot of online stores have been selling and advertising candies, lollipops, and chocolate with cannabis flavor on social media.

These products do not bear any brands or labels, while shop owners advertise them as “exotic foods” to attract buyers, who are mainly young people liking to experience new things.

Most sellers claim their confectionery is imported from Europe and restocked once every two weeks.

H.N., one of the sellers, said that the products come at an affordable price because they only contain a small amount of cannabis.

N. stated she began selling the type of confectionery in late 2018 and has delivered about 70 orders so far.

Cannabis can also be found in cookies brought into Vietnam by overseas students, according to the Institute of Psychological Studies and Support to Drug Users.

The cookies often have chocolate or raisin flavors, the agency added.

Police in Ha Dong District, Hanoi recently arrested a group of people for producing this type of illegal snacks.

Although the products only contain a small amount of cannabis, they can still be addictive, said Dr. Duong Minh Tam from the mental health institute under Hanoi-based Bach Mai Hospital.

A representative from the anti-drug police division under the Ministry of Public Security confirmed to Tuoi Tre (Youth) newspaper on Monday that they will impose a stern penalty upon traders of confectionery products containing cannabis.

Tetrahydrocannabinol, or THC, the main mind-altering ingredient found in cannabis, is an addictive stimulant that can cause such sensations as excitement and delusion, according to the police unit.

THC can be more harmful than cigarettes when it comes to damaging the respiratory system and worsening cancer, it said.