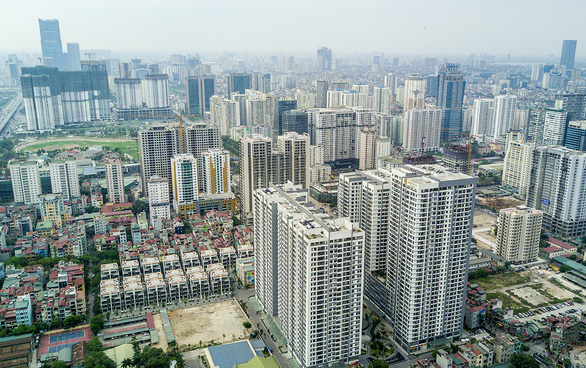 As more and more young people move to Hanoi to begin their lives in the big city, the idea of home ownership in the Vietnamese capital seems to be little more than a pipe dream amidst skyrocketing prices.

On nearly every corner, agents and property representatives approach every passer-by willing to listen, offering attractive deals on modern apartments.

But of course, if it sounds too good to be true, it probably is.

Quoc Trung, a sales agent for a 30-story apartment block on Thang Long Street in Hoan Kiem District, is one of these property brokers, offering what he calls a 'one-in-a-million' window view not just for Hanoi, but for all of Vietnam.

Trung claims that units in his building will boast views of the upcoming F1 race in Hanoi right from their windows.

The true cost of Hanoi housing

Most property experts estimate the value of a modern apartment suitable for a young couple to be in the VND1.6 billion (US$69,000) range, though 'suitable' takes on completely different meanings, depending on who the buyer asks.

While many young professionals are trying to scoop up hot deals on massive 80m2 three-bedroom units, others are opting for more modest accommodations.

For Vu Tuan, a husband and father who has lived in 18 different units in Hanoi in the past ten years, 80m2 seems nothing more than gluttonous.

Tuan and his small family currently live in a 40m2 one-bedroom apartment with a small living room and a nook with a bunk bed for their two kids.

After having lived happily in such a small space for so long, the family cannot imagine what they would do if they lived somewhere double that size.

According to Quoc Trung, buyers only need to have VND400 million ($17,200) in hand to purchase a property.

This includes a VND80 million ($3,450) down payment and other installments over a certain period of time.

Bank loans will cover the rest and the buyer will incur monthly payments of VND8-10 million ($345-430), inclusive of interest, to pay back this outstanding amount.

All of the paperwork is expected to be processed by the real estate agent, meaning buyers simply have to make their down payment and to be handed the keys.

For Vu Tuan and his wife, a VND80 million deposit is entirely within reach. The small family recently earned VND60 million from selling a motorbike, and an additional VND20 million to cover the remainder of the deposit probably will not break the bank.

“We can [buy a place] if we try hard. I’ll cut down on buying facial products and we can cook our meals at home," Tuan’s wife said.

"I can even sell produce from my father’s farm.

"That should definitely be enough to cover the rest.”

The monthly rent at their current apartment is VND7 million ($300). To own their own place, they would simply need to come up with VND3 million ($129) more.

The real cost of ownership

Nguyen Phi has made big bucks from selling three separate apartments in Hanoi in the past three years.

“If you plan to use the property for business, then it’s worth considering a loan," he advised.

"If you only plan to use it as a residence, then interest on the loan can really balloon pretty quickly.”

According to Phi, buyers should only take out a mortgage if their down payment on the property covers at least 50 percent of the total cost, otherwise the VND100 million ($4,300) in annual interest they will be adding to their debt might quickly become insurmountable.

“If you’re unlucky, then get ready to join the homeless,” Phi warned.

Phi’s first apartment in Hanoi was located in Ha Dong District, but his workplace was 20 kilometers away.

Tired of his daily two-hour commute, he decided to sell his property at a loss and rent a place closer to his office.

He eventually got married and began earning a higher salary, allowing him to purchase his dream home. He then bought three more as investment property.

“Vietnamese country folks are too concerned with buying a place to live. That’s not important at all. They need to be patient until they’ve really saved up enough money,” he explained.

“Now people are buying apartments to do business, not for living.”

Phi’s advice for the low-income Hanoians like Vu Tuan is to look for social housing, where both prices and interest rates are comparatively low.