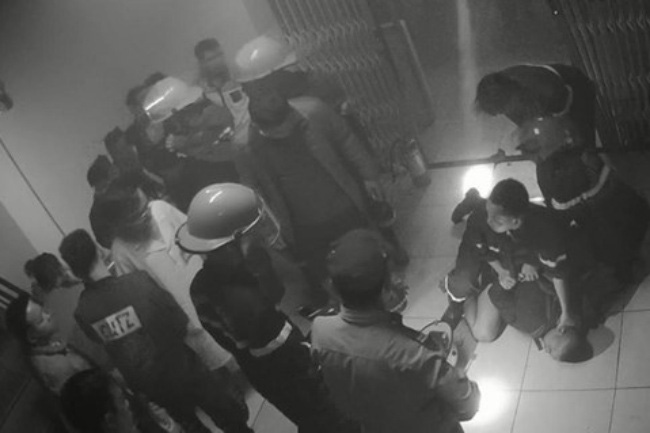 Police in the north-central Vietnamese province of Nghe An have initiated legal proceedings against a man who set a hospital on fire before attacking a pregnant nurse.

Nguyen Van Hoi, 31, will be held in custody for two months while police investigate the situation, the police unit in Hoang Mai Town, Nghe An Province confirmed on Thursday.

According to preliminary information released by investigators, Hoi was drunk the night before, December 25, and went on a rampage in a coffee shop run by his family.

After destroying multiple objects in the coffee shop, he ran to a nearby road where he tried to stop oncoming traffic.

He then ran back to his home, climbed on to the roof, and began an incoherent stream of curses.

While trying to descend from the roof, he hurt his leg and drove himself to a hospital in Hoang Mai Town to treat the wound.

At around 3:45 am on December 26, Hoi was smoking at the infirmary when he was asked to stop.

Angered by the reminders, Hoi tried to burn down the hospital by lighting his own bed on fire.

Fortunately, others in the building were able to evacuate before the entire room was filled with smoke.

L.T.H., a three-month pregnant nurse, rushed into the room to assist other patients, but was instead attacked by Hoi.

Police officers promptly arrived at the infirmary to put out the fire and apprehend Hoi.

H. suffered minor injuries and her unborn baby was unharmed.

According to officers, Hoi had previously shown signs of mental instability, including an incident last month, when damaging property owned by another local resident.