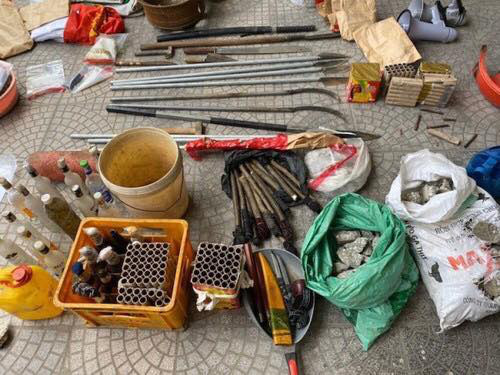 Hanoi Police on Friday launched a criminal investigation into a disturbance that killed three police officers in an outskirts neighborhood in Hanoi the previous day.

Three police officers were killed after being attacked by a group of people armed with grenades, petrol bombs, and knives in Dong Tam Commune, My Duc District on Thursday, the Ministry of Public Security said in a statement published on its website on the same day.

One of the attackers was also killed and another injured in the incident, the statement reads.

The officers were tasked with guarding a project to build security walls around Mieu Mon Airport, a local military airfield, when they were attacked by the mob, the ministry said.

On Friday, the investigation unit of Hanoi Police launched criminal proceedings against the case to investigate three charges including "murder," "illegally storing and using weapons," and "resisting on-duty officers."

Around 30 people have been arrested for the investigation.

A report by the Hanoi Police said when his body was examined, Kinh was holding a grenade in one of his hands.

A number of the arrested told investigators Kinh is the ringleader and mastermind of the disturbance case in Dong Tam.

Xo added that the situation in Dong Tam is now "stable" and competent units have resumed building the walls around the Mieu Mon Airport.

The ministry said that except for the three killed police officers, all personnel working at the construction site at Mieu Mon Airport are safe.

The ministry also advised people against listening to "distorted rhetorics" on social networks regarding the incident, adding that it would promptly update the people on any information relevant to the case.