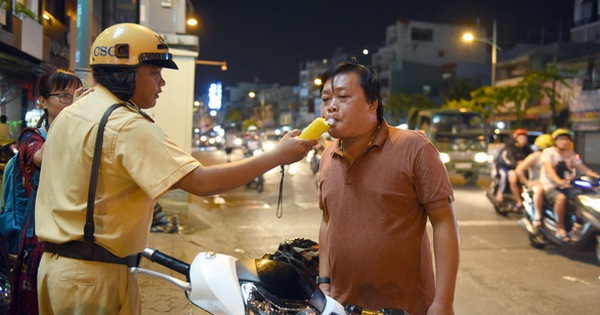 Drivers in Vietnam have been told they can demand a second breathalyzer test a few minutes after the first one if they have consumed ripe or fermented fruits before driving, amidst concerns that the consumption could cause a false positive and lead to the drivers being subject to hefty fines under the country’s stringent new drink-driving law.

The new law, which took effect on January 1, stipulates that drivers must be completely sober, not having downed any amount of alcoholic drinks, while operating bicycles, motorbikes, automobiles, and any other vehicles on Vietnam’s roads.

As many drivers have been fined for the past two weeks, there have been concerns over unfair punishment against drivers for eating ripe or fermented fruits, which can leave hints of alcohol in their breath.

Hanoi’s traffic police have squashed these concerns, saying in a teleconference last week that there had yet to be any case of traffic violators being booked for eating ripe or fermented fruits or drinking their juice.

“Many people have raised concerns that eating fermented fruits [and driving] would be in violation of the law, but traffic police officers have not detected any such case in reality,” said Dao Viet Long, deputy head of Hanoi’s traffic police.

“Drivers are allowed to request a second breathalyzer test if they want to prove they haven’t been drinking,” he added.

In most cases, the breath alcohol level should return to zero after around 15 minutes if the driver indeed has not been drinking, according to health experts.

Alternatively, people can have a short rest for about 15-20 minutes after consuming such fruits before driving.

Cyclists who ride under the influence of alcohol will be fined up to VND600,000 ($25) while motorcyclists and car drivers face fines of up to VND8 million ($86-345) and up to VND40 million ($1,724), respectively, according to a government decree specifying fines for drink-driving.

The specific amount of the fine depends on the violators’ breath or blood alcohol concentration.

For the first time in ten years, Hanoi reported a drop in the number of traffic deaths in the first week after the 2020 New Year, although the drop was by only nine deaths year-on-year, Long said.

The new law also regulates locations that are allowed to sell alcohol and includes stricter regulations on alcohol advertising.

The average Vietnamese consumed 8.3 liters of pure alcohol from alcoholic beverages in a year, according to 2018 figures.