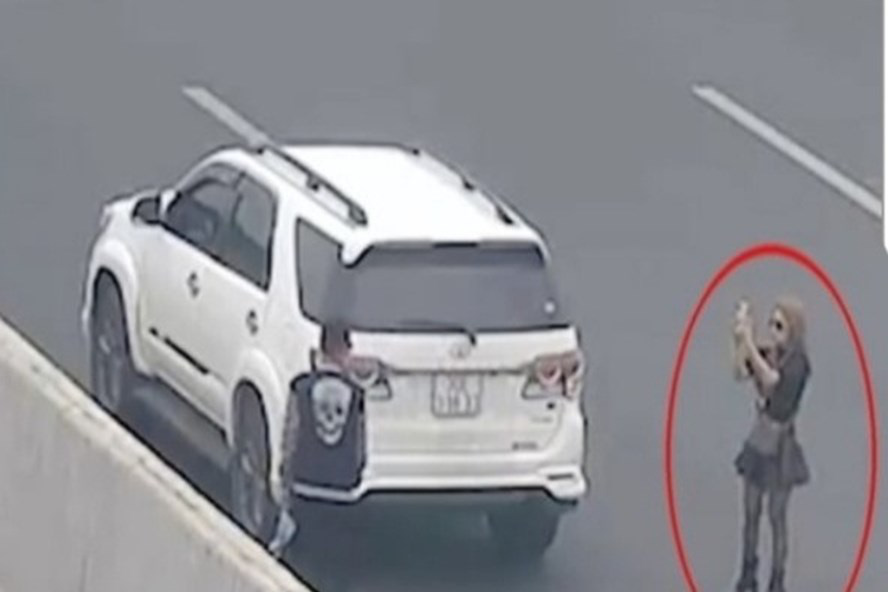 A Vietnamese woman has been slapped with a hefty fine after CCTV camera footage showed that she stopped her car in the middle of an expressway in northern Vietnam to take a photo of a companion.

Traffic police officers said on Tuesday that a traffic camera installed on the Hanoi – Hai Phong Expressway, which connects the two northern cities, captured the entire incident on Monday afternoon.

In the video, a woman was filmed stopping her car in a running lane next to the expressway’s median strip, where vehicles are allowed to run at up to 120 kilometers per hour, at 1:04 pm.

The female driver and a male passenger got out of the vehicle before she started taking a photo of him posing next to their car on the expressway.

In a daredevil move, the woman then crossed the street amidst fast-moving vehicles to snap her male companion from afar, before returning to their car and driving away.

A woman takes a photo of a man after parking her car in the middle of the Hanoi – Hai Phong Expressway in northern Vietnam on January 27, 2020, in this CCTV footage.

The management of the Hanoi – Hai Phong Expressway, in coordination with a team of officers from the Department of Traffic Police, immediately tracked the driver’s information after acknowledging the case.

The woman in question was eventually identified as Bui Thi L., 25.

L. was handed a VND7 million (US$300) fine, around two months' worth of basic salary in Vietnam, and had her driver’s license revoked for three months.

Parking or stopping on expressways is subject to a fine of VND6-8 million ($260-345) and driver’s license revocation for 2-4 months, according to a 2019 government decree stipulating fines for traffic violations in Vietnam.