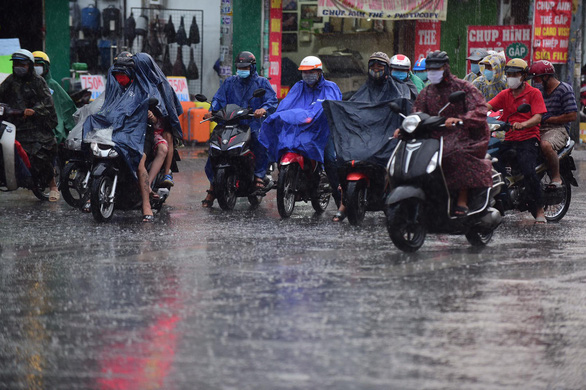 It began raining in Tan Phu District and Thu Duc District at about 1:00 pm on Thursday before other districts got a downpour, taking motobike drivers and pedestrians already used to the scorching afternoon sun by surprise.

It was raining heavily in some parts of the city, but only lasted for 10-15 minutes in such districts as Phu Nhuan and Binh Thanh.

The rain did not cause congestion – as downpours had often done ­– since there has been less traffic in the southern metropolis amid social distancing and school and store closures owing to the novel coronavirus disease (COVID-19) epidemic.

According to the southern hydro-meteorological station, convective clouds are still forming over the southeastern provinces of Binh Phuoc and Dong Nai, and the Mekong Delta provinces of Long An and Dong Thap.

Showers and thunderstorms are in the forecast for these localities, with a possibility of expanding to nearby areas.

Residents in these areas are advised to be aware of lightning and strong winds that may accompany thunderstorms occurring in the afternoons and evenings of the coming days.

The lowest temperature in the southern region is expected to be about 25-28 degrees Celsius on average, while the highest will be around 32-35 degrees Celsius.