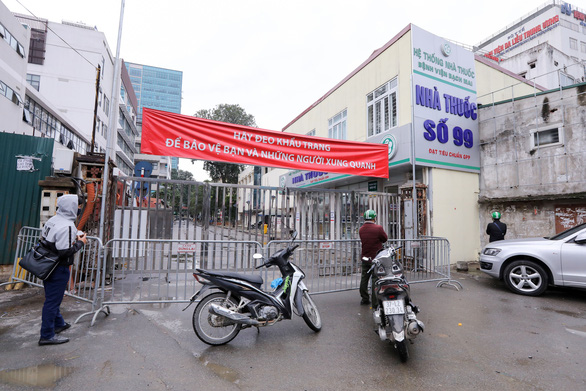 A patient from Hanoi has tested positive for the novel coronavirus again after she had been declared free of it this week.

She was discharged from the hospital on Tuesday after testing negative twice, health authorities in the capital said on Sunday.

The patient, 44, was told to self-isolate at home for 14 more days after her discharge.

She was retested on Friday as she had shown signs of illness, including a dry cough and chest tightness.

The result returned positive on Saturday.

She had only been in close contact with her husband and child so the two have been sent to a collective quarantine camp.

The patient has been transferred to the National Hospital for Tropical Diseases in Hanoi for treatment.

This is not a re-infection, local healthcare authorities said, explaining that a low viral load may have led to a false negative result last time. Sampling issues may also be to blame, they added.

The patient is an employee of Truong Sinh Company, a catering service provider contracted by Bach Mai Hospital in Hanoi, where dozens of cases have been traced to.

She was diagnosed with COVID-19, the disease caused by the virus, on March 29 and was sent to a hospital in Ha Nam Province, located in northern Vietnam, for treatment.

The patient was discharged on Tuesday and taken home for self-isolation in Hanoi.

The patient was confirmed to first catch the virus on March 8 and was treated at Da Nang Hospital until March 27.

He had tested negative for the virus three times prior to his hospital discharge.

As per regulations, the Briton was asked to self-isolate at Sam Grand Hotel in the central city for another 14 days after his hospital release.

On April 11, he took a flight from Da Nang to Ho Chi Minh City and tested positive after arrival.

The test result came back after he had left Vietnam for the UK.

On April 17, the British Consulate General in Ho Chi Minh City announced he had tested negative for the virus upon landing in the kingdom.

South Korea has similarly reported that about 160 recovered patients had had their retests return positive. An investigation has been launched to find out the cause.

Vietnam has confirmed 268 COVID-19 patients so far, with 202 having recovered and 66 active cases, including the woman being sickened again.