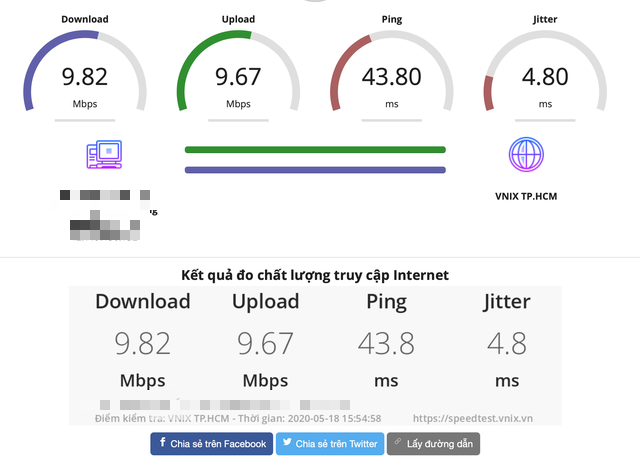 Internet service providers (ISPs) in Vietnam have confirmed that the submarine cable system faced an issue on May 14, causing Internet speed in the country to be disrupted.

A representative of a domestic ISP said all connections through the AAG system have been redirected through other systems to minimize the connection latency for users.

The cable system is notorious for its high frequency of recesses throughout the year.

The latest maintenance on the AAG cable system was completed less than a month ago, on April 21.

Duy Tung from Ho Chi Minh City has quite a few complaints about the sluggish Internet speed over the last few days.

“Gmail takes a while to open and even longer if there are attachments. Even Messenger continually reports failure to deliver messages. Most services with foreign hostings are slow these days,” Tung said, referring to Google’s email service and Facebook’s chat app.

Her job requires engagements in virtual conferences, to which the slightest fluctuation in Internet bandwidth can make a vexing experience.

“The average meeting lasts 30 to 60 minutes, yet the choppy Internet may drag it out twice as long. Everyone is frustrated at the bandwidth problem,” Uyen said.

According to customer feedback, the download speed of international services has significantly worsened, affecting work operations of various firms as well as general usage of the Vietnamese public.

“Our company is [letting employees] work from home via online tools, yet the Internet speed has halted many meetings. The work progress is naturally hindered, which causes us a great deal of frustration,” Uyen said.

A run of the Speedtest tool provided by the Vietnam Internet Network Information Center (VNNIC) to measure the Internet speed of a local ISP by Tuoi Tre (Youth) newspaper on Monday afternoon showed both upload and download speeds hovered around 10Mbps.

Another ISP returned a result of 20Mbps, which is much lower than the average of 61.69Mbps for fixed broadband Internet services of Vietnam announced by VNNIC in April.

The endless loop of cable disruption

The segment connecting to Vietnam is 314 kilometers long and strikes land in Vung Tau City in the southern region, delivering up to two terabits per second.

The AAG system holds an extensive track record on international connection issues and has been blamed for many occasions where Internet speed slumped in Vietnam.

In November and December 2019, a malfunction in the system was detected and was not completely fixed until late January.

The cable went on to break down again in February, affecting domestic Internet speed until the problem was resolved in March.

IA and AAE-1, two other international Internet cable lines employed by Vietnamese ISPs, have exhibited the same pattern of issues.

Both faced problems since late 2019 and did not return to normalcy until early February.

Despite the ISPs’ claims of backup mechanisms in place regarding AAG malfunctions, the recent instances of Internet interruption speak volumes about the still-prominence status of the AAG cable system to Vietnamese users.