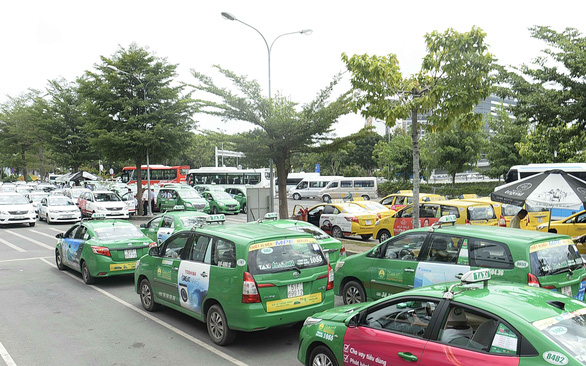 Owners of at least 1.6 million cars, trucks, passenger coaches, and taxis operating as commercial transport vehicles in Vietnam have been told they will have to change their white number plates to yellow ones next month.

A circular relating to the issuance and revocation of vehicle registrations recently issued by the Ministry of Public Security has mandated that the change be made between August 1, 2020 and December 31, 2021, with the numbers and letters on the plate remaining black against the new yellow background.

Statistics released by the Traffic Police Department under the Ministry of Public Security show that 1.6-1.7 million cars, trucks, passenger coaches, and taxis are currently in use as commercial transport vehicles in Vietnam.

While those numbers prove the transport sector is booming in Vietnam, the operators of the vehicles worry that the change will affect their bottom line.

Bui Danh Lien, former chairman of the Hanoi Transport Association, explained that the industry has been dealing with several new mandates handed down over the past few years and many stakeholders worry the change will do little to solve inadequacies in vehicle management.

Tuan Anh, a driver for a ride-hailing service in Hanoi, shared his concerns that the switch will spell a major increase in red tape for local drivers.

“What am I supposed to do with my yellow-plated car if I no longer want to partner with the ride-hailing service or I want to sell the vehicle?” Anh wondered.

Officials, however, claim the new rule is needed for authorities to distinguish between transport vehicles and private cars.

As for concerns over the bureaucratic process of exchanging the white plates for yellow ones, Pham Viet Cong, head of Vietnam’s Vehicle Registration Guidance Division, said the paperwork will be simple and not cost much, with vehicle owners paying only for the cost of the new number plate.

Cong dismissed speculation that unregistering service vehicles would be a hassle, declaring that the planned procedure will be simple and the expense will be equal to the cost of changing broken or damaged number plates.

“The division will direct staffers at vehicle registration offices to make it as easy as possible for drivers to change their number plates,” Cong stated.