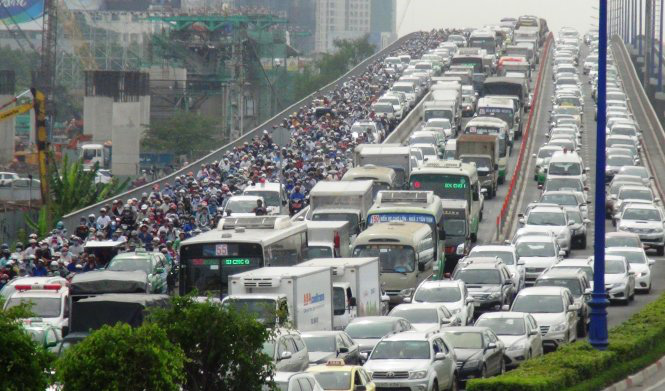 Authorities in Ho Chi Minh City are set to begin charging automobile drivers an amount of money for entering downtown areas next year.

Members of the municipal People’s Council on Saturday passed a resolution on boosting public transport and controlling the number of personal vehicles in the southern metropolis.

Accordingly, car drivers will be required to pay a fee whenever they enter downtown areas from 2021 to 2025.

The plan is considered significant to the enhancement of the city’s socio-economic development as well as living conditions of local residents.

The municipal People’s Council stated that improving public transport and minimizing the number of personal vehicles have to be carried out simultaneously.

The government will play a leading role in building infrastructure and operating the city’s public transport system.

In order to better manage personal vehicles, the ministry suggested charging a road toll in the city center, evaluating emissions of motorcycles, and inspecting technical safety and environmental protection conditions of vehicles.

In 2021-25, the city should focus on improving bus services and managing the number of personal vehicles in downtown areas, the transport ministry stated.

From 2026 to 2030, mass public transport will be developed while the number of personal vehicles will continue to be reduced.

The entire plan was projected to cost VND393.8 trillion (US$16.9 million), of which VND47.6 trillion ($2 million) will be funded by the state budget, while the rest will come from the private sector and official development assistance (ODA).