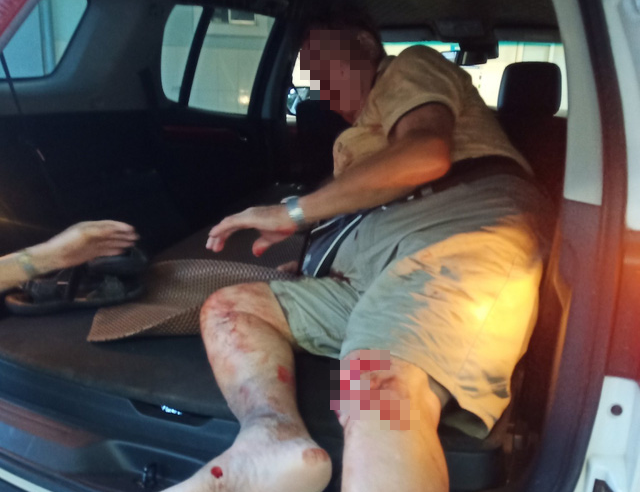 A British man who went viral this week thanks to video footage of him blocking a wrong-way driver in the central Vietnamese province of Quang Ngai is in hospital for head and knee injuries he sustained in a crash, doctors said Thursday.

His health is stable for now but he will need further monitoring, according to the head of the infirmary.

Surtess was riding a bicycle when he got involved in a crash with a motorbike in Quang Ngai on Wednesday, according to Duy, a man from neighboring Da Nang City who witnessed the collision and rushed the British man to the hospital.

“I know a little English so I was able to communicate with him and ask to check his personal belongings for identification. He couldn't speak at that time but nodded his head in approval,” Duy recalled.

Duy was not able to find a passport amongst the man’s belongings, so he decided to post the story on his Facebook account to ask netizens for help in finding the man’s relatives.

The locals were able to quickly identify Surtess as it turned out he had gone viral just the day before when footage of him using his bicycle to block a wrong-way motorbike driver on a Quang Ngai street appeared on Facebook.

The Briton’s uncompromising attitude eventually forced the motorbike driver to turn his vehicle around.

Many who viewed the video praised Surtess for the good example he set.

Phuong Trung, the Quang Ngai local who recorded the video, was stunned to see a foreigner being a role model to her countrymen.

“I was traveling on Nguyen Van Linh Street when I saw a male foreigner who was standing with his bicycle near a construction site on Bau Sat Bridge blocking a young man riding the wrong way with a child on a motorbike,” Trung told Tuoi Tre.

“[Surtess] became very assertive and convinced the other man to turn back and ride correctly. I recorded the entire encounter because I found it such an inspiring story,” she explained.

After the clip went viral, netizens began researching Surtess and found he was a retired expert who had worked for a company in the Dung Quat Economic Zone in Quang Ngai.

After retiring, he chose to settle down permanently in Quang Ngai were he offers free classroom lessons to locals.