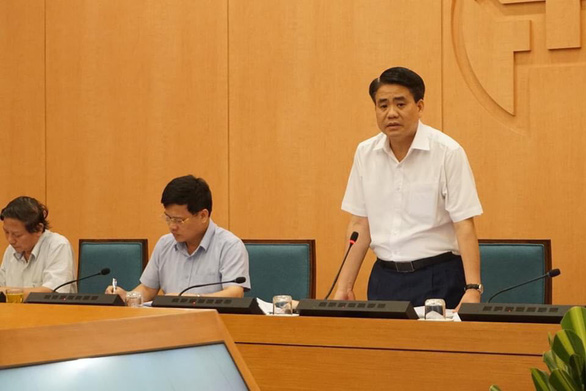 Hanoi has ordered all bars, karaoke parlors and roadside stalls to close and banned large gatherings from Saturday to prevent the spread of novel coronavirus disease (COVID-19) as several other localities have also taken similar measures.

The order took effect from 0:00 am Saturday.

Restaurants and malls are still allowed to open but social distancing must be practiced, including keeping at least a one-meter distance from one another, Hanoi chairman Nguyen Duc Chung said during a meeting on COVID-19 prevention and control on Friday.

Chung assessed that the risk of the virus spreading in Hanoi is high as there are approximately 54,000 people who have returned to the capital city from the virus-hit central region since July 8, up from 21,000 previously reported.

Da Nang City and Quang Nam Province, two of the most popular tourist destinations in central Vietnam, have become the latest coronavirus hotspots in the country where the majority of 116 local infections since Saturday last week are reported.

The Southeast Asian country's three virus-related deaths to date are all reported in Da Nang and Quang Nam.

Both of Hanoi’s two infections in the community recently returned from trips to Da Nang.

Chung demanded that Hanoi’s Center for Disease Control do its best to provide a sufficient amount of rapid-result test kits for districts in the city to quickly finish testing all returnees from the virus-hit region.

He asked for continued monitoring of all people returning from Da Nang and Quang Nam since July 1, especially those arriving by train and coach.

The municipal Department of Education and Training and district-level authorities were asked to ensure hygiene for the upcoming national high school examination, scheduled for August 8-10.

The commerce department was tasked with preparing goods and monitoring the market to prevent surges in prices of essential goods.

Among them, ten had initial positive results, including two in Nam Tu Liem District, one in Hoang Mai District, six in Gia Lam District, and one in Thanh Xuan District.

All positive cases have been tested again via the PCR diagnostic technique to confirm their infection.

So far, eight of the suspected positive cases have been confirmed as negative while two in Gia Lam are still pending results.

Viet said a number of new COVID-19 cases might pop up in Hanoi in the coming days as results start to come in.

The south-central province of Phu Yen, the southern province of Dong Nai and the northern province of Quang Ninh have also taken similar measures to Hanoi’s, banning all nonessential businesses including karaoke parlors, bars and discos as well as restricting crowded activities from Saturday.

In northern Hai Phong City, residents are asked to not leave their homes unless necessary and regularly wash their hands with soap or hand sanitizer. When outside, residents must wear a mask, keep at least a one-meter distance from others, and not gather in groups of more than 30 people in public places.