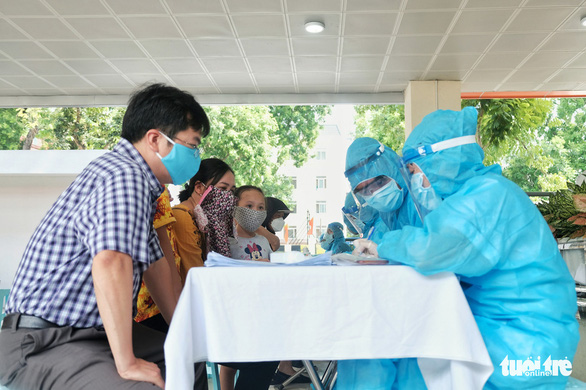 Of the three locally-transmitted cases, patent No. 785 is a 42-year-old man living in Duc Thuong Commune in Hanoi’s Hoai Duc District.

He and his family traveled to Da Nang City between July 16 and 20.

He developed coughing on Monday and was taken to the National Hospital for Tropical Diseases in Dong Anh District on Thursday, where he was tested for COVID-19.

Results released on Friday showed that he was positive for the novel coronavirus.

The National Steering Committee for COVID-19 Prevention and Control is expected to release details later Saturday about his travel history after he returned to Hanoi from Da Nang.

Two other community-based cases are people from the central province of Quang Ngai, who came into close contact with COVID-19 patients.

The two imported cases are citizens who were repatriated from Mexico on August 5 on the flight VJ7837, which landed at Cam Ranh International Airport in the south-central province of Khanh Hoa.

They were quarantined upon arrival and sampled by the Khanh Hoa Center for Disease Control on Thursday.

Results released by the Pasteur Institute in Nha Trang on Friday showed that both tested positive for the coronavirus.

Currently, they are being treated at Khanh Hoa Hospital for Tropical Diseases.

Vietnam has recorded 789 cases of COVID-19 since the pandemic first hit in January, including 473 local infections and 316 cases imported from other countries.

Up to 333 cases traced to Da Nang have been detected since local transmission re-emerged in the central city on July 25, which ended Vietnam's streak of 99 days with no community-based infections.

Ten virus-related deaths have been documented in the Southeast Asian country while 395 COVID-19 patients have recovered.

More than 166,000 people are quarantined nationwide at hospitals, accommodation facilities or at their homes.