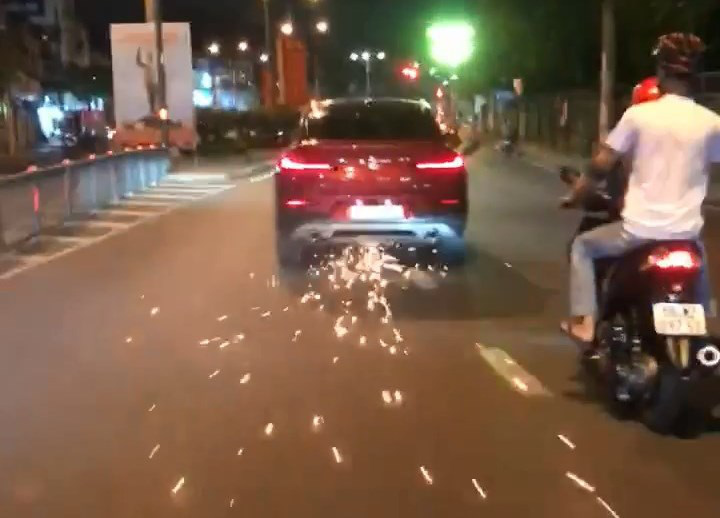 A BMW driver who caused multiple hit-and-run accidents in downtown Ho Chi Minh City on Friday night was found to be severely intoxicated while behind the wheel.

On the late evening of Friday, L. was operating her BMW car while traveling eastbound on Pham Viet Chanh Street when she collided with another car that was stopped on the side of the road.

L. fled the scene, but she was chased by passers-by who witnessed the collision. To outrun her pursuers, L. was seen accelerating and trying to block off their bikes.

When headed off by a motorbike standing in the middle of the way, L. even ran over the obstacle, dragging the bike under the chassis of her BMW for a length.

She was only stopped after arriving on Cach Mang Thang 8 Street, where commuters surrounded her vehicle before police officers from Ward 11 of District 3 came to detain her.

A BMW car is chased by motorbikes after a hit-and-run incident in Ho Chi Minh City, Vietnam, August 28, 2020.

According to the Vietnamese Law on Road Traffic, the mere presence of alcohol in one's system already amounts to a violation, while an alcohol level of 0.4 mg/l of breath or 80mg/100ml of blood would merit the most severe punishment for drunk driving.

Three vehicles were hit by L., but no injuries were reported.

An investigation found that L. had been on a drinking spree on Friday, starting from 2:00 pm that day.

Responding to Tuoi Tre on Saturday, L. said she had been at a restaurant in District 1 before the accident.

Upon putting her car in reverse to leave the restaurant’s parking lot, she was surrounded by 4-5 motorbikes, whose riders knocked on her car door, insisting she had caused collisions with their vehicles and demanding that she pull over, the woman explained.

“It was late into the night, I was highly vigilant of the threat of car heists, so I did not stop and instead fled. After a short while, I realized that they had pulled out weaponry and were smashing my wing mirrors and my car. Seeing peril, I ran even faster,” L. claimed.

L. also admitted to having run over the motorbike. It was only after she saw police officers that she felt safe and pulled over, L. said.

Regarding the crashes that took place outside of the restaurant, L. assumed them to be small damage.

“Had there been severe crashes, I would have known. I know the guards at the restaurant, my booking details are also there so they would have informed me [if I had crashed into vehicles there],” the woman claimed.

“It was late at night and a group of men were chasing me. I am a woman. I thought I was in danger so I tried to find somewhere safe to pull over."