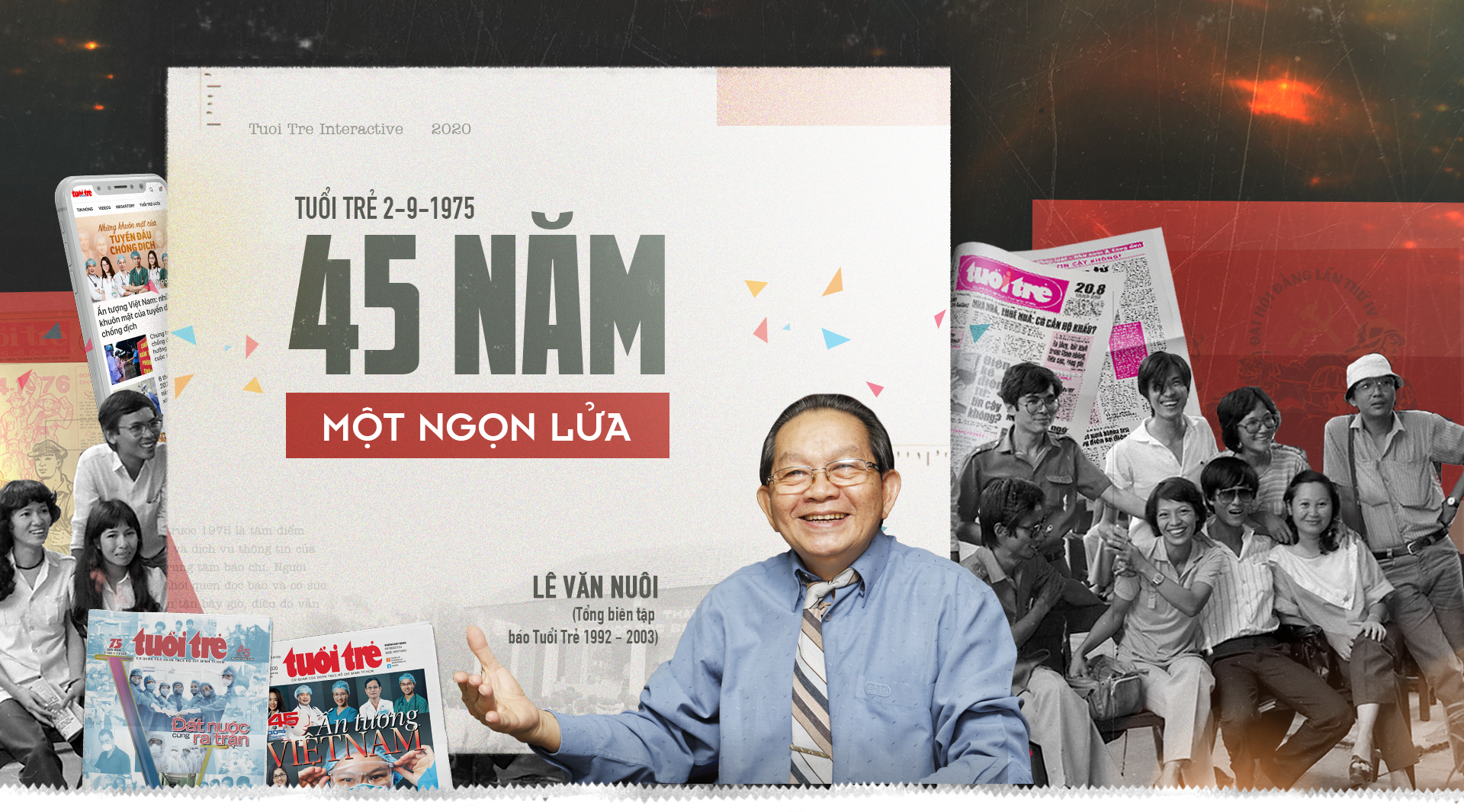 45 years of Tuoi Tre: A flame that never goes out

Pre-1975 Saigon – the old name of Ho Chi Minh City – was regarded as the economic hub, the trade centerpiece as well as the nerve center of journalism in southern Vietnam. Occupants of the city were accustomed to waking up to a daily newspaper, which expounded the immense demand for news in the territory – a fact that still rings true to this day.

In May 1975, there were only four press agencies operating in Saigon: the city’s television network and radio station, the daily newspaper Sai Gon Giai Phong (Liberated Saigon) as well as Phu Nu (Women) Newspaper.

During a meeting with the Standing Committee of the Ho Chi Minh Communist Youth Union, Le Duan – the incumbent General Secretary of the Communist Party of Vietnam – spearheaded the idea of a newspaper representing the young generation of the city.

“Saigon is home to a million youths who have great prospects in our cause to build the city in peacetime. Youth people in this city are of fair education levels; they inherit a long-standing tradition of urban civil movements to seek independence and freedom for the country,” Duan remarked after hearing the secretary of the Youth Union’s report on youth affairs in the southern Vietnamese hub.

“Youths in this city need a press agency.”

The call for a newspaper for youths was met with ardent endorsement of the students, parts of whom have been practicing journalism – either publicly or in secret – during the war era.

Taking advantage of the support, the Youth Union issued the first edition of Tuoi Tre (Youth) Newspaper on September 2, 1975.

Under the title of a third-tier newspaper as stipulated in the framework of the then-Ministry of Culture and Information, Tuoi Tre Newspaper found itself undersupplied in terms of paper for printing, a common circumstance during Vietnam’s Bao Cap (Subsidy Economy) period.

This critically hindered the prowess of Tuoi Tre to meet the demand for news of the city’s youths and residents.

“Why is it that every newspaper owner in Saigon before 1975 were well off, but Tuoi Tre are currently trying to solicit money from the central government to run its operations?” inquired Vo Van Kiet, the incumbent Secretary of the Ho Chi Minh City Party Committee during a working meeting with Tuoi Tre Newspaper, whose chief editor was Vo Nhu Lanh then, in 1983.

Once again, inquiries from the state leaders were met with aspiration for financial independency from the Tuoi Tre staff.

Taking cognizance of the problem, Tran Minh Duc, Deputy Editor-in-Chief of Tuoi Tre at the time, initiated the construction of a dedicated paper mill for Tuoi Tre, which sought to bring autonomy in paper supply to the newspaper. The project included a craft paper workshop and a chemical plant, which provided input for the paper factory.

Despite the initial turbulence, the paper mill sustained Tuoi Tre’s autonomy in paper supply, which helped elevate the newspaper’s circulation to a few hundred thousand copies per issue.

By 1985, Tuoi Tre had been able to stop receiving state subsidies, completely capable of operating on readers’ financial backing.

Mid-1983 saw the departure of Vo Nhu Lanh from the editor-in-chief position of Tuoi Tre. Lanh was succeeded by Vu Kim Hanh, who steered Tuoi Tre to new apexes with the help of Deputy Editor-in-Chief Huynh Son Phuoc and the stellar roster of reporters and journalists in the newsroom.

After years of hopping in-between callings at the Youth Union, Le Van Nuoi made the fateful leap to work for Tuoi Tre in 1992. During the 1992-2003 period, Tuoi Tre and its editorial board stood at a historical crossroads, prompting them to make imperative decisions.

As the journalism landscape in Vietnam adequately developed, contending newspapers were bringing information of competitive quality to the newsstands. The market economy was tip-toeing through its infant years, where opportunities were not easily accessible for upright entrepreneurs whilst corruption still ran rampant and state-owned enterprises assumed the dominant position.

The state of affairs, plus the burning demand from readers, placed apparent pressure on the Tuoi Tre cohort to enter the frontline of Vietnam’s anti-corruption battle.

This period gave rise to acclaimed reportage, exposés, and other noteworthy journalistic output from the devoted writers of Tuoi Tre, namely the series on corruption in public investment, bribery at highway tollbooths, inadequacies in education, decadence of lifestyles, and more.

As stories in the newspaper saw more variety, the reporting quality itself was also enhanced with perseverance in politics and the introduction of up-to-date forecast and analysis methodology. These are among the reasons why Tuoi Tre has gained a strong foothold, with readers as a trustworthy source of updates on current affairs.

Till this day, many cannot forget the burst of joy upon seeing the announcement footnote in a 2002 issue of Tuoi Tre: “Catch the latest issue of Tuoi Tre Newspaper, published six issues per week.”

By 2006, Tuoi Tre had completed its transformation to become a bona fide daily, with top-ranking circulation figures.

The warm reception of readers was the very reason why Tuoi Tre continued realizing its potential in this period: its financial stability gradually developed from its print newspaper and advertising operations.

During this time, the publishing department of Tuoi Tre also worked to publish for 50 other journals. Thanks to the revenue generated from advertising, Tuoi Tre boasted its position as one of the biggest taxpayers among the country’s press agencies.

A flame that never goes out

Looking back on the 45-year journey, it is apparent that the brand of Tuoi Tre was built with a determination to stay true to its central identity: sensitivity to the latest changes, an understanding of the economic reform rulebook, mobilization of resources for expansion, competitiveness and efficiency for global economy intergration, passion built on citizens’ demand, dedication to distressing topics of right to business opportunities, public health, environmental protection, rights to education and harmonious development of youths, as well as the uncompromising stance against wrongdoings.

Over the course of 45 years, the writers at Tuoi Tre, those whose lives are fatefully bound to the art of journalism and the service of readers, have had to hold their ground against a plethora of challenges: from the rivalry from multimedia establishments entering the market to the government’s more stringent regulations on information management.

In light of the new scenario, journalists are coming to terms with a new definition of their long-standing discipline, as well as the commitment inside their hearts.

Those are the flames of devotion to the common good, the flames of steadfastness, and the yearning for an information-charged civil society. These flames, started by the cadre of Tuoi Tre, will be enkindled and kept ablaze by the exuberant successors.

On this anniversary, I wish Tuoi Tre persistence in its upward trajectory onto the coming years!