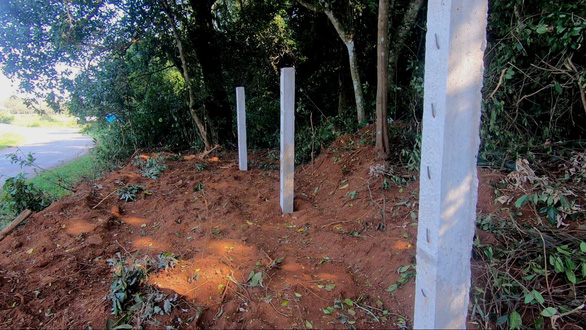 Authorities in the north-central Vietnamese province of Quang Tri have slapped a local company with a combined fine of over VND300 million (US$13,600) for deforesting an area of more than 1,300 square meters.

The area is made up of both production and special-use forest in the Ru Linh forest area in Quang Tri’s Vinh Linh District, the provincial People’s Committee confirmed on Tuesday.

Song Hien Tourism Service Trading Co. Ltd., which is based in Vinh Linh, was set to develop a nearly-100-hectare ecotourism project at a cost of more than VND320 billion ($13.9 million) in this forest area.

In February 2020, Song Hien sent equipment and employees to level the ground, open roads, set up fences, and flatten the edge of the Ru Linh forest along National Highway 9D.

The company also plowed a road that cuts through the natural forest and chopped down many trees within the boundary of the Ru Linh special-use forest without permission.

A joint inspection carried out by the provincial Department of Agriculture and Rural Development and the Department of Planning and Investment, together with local authorities, found that Song Hien did not have a detailed plan or design for the ecotourism projet at the time of the deforestation.

The project’s construction components were also done without permission from relevant agencies.

In addition, the company has to pay VND113.6 million ($4,900), equivalent to the value of a crawler excavator which was used for the violation, to state coffers.

The firm must also restore the destroyed forest to its original state within 30 days from the date of receiving the penalty decision.

One driver and one security guard of the company were also fined VND5 million ($217) each for deforestation.