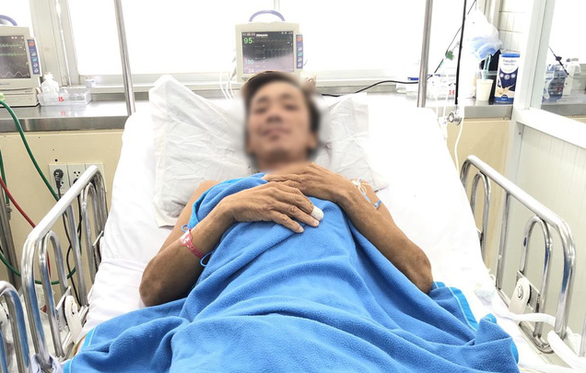 A man from the southern Vietnamese province of Tay Ninh who was in a critical condition after being bitten by a king cobra has sent a thank-you message to his benefactors after making a positive recovery, according to the hospital where he is treated.

The intensive care unit (ICU) of Cho Ray Hospital in Ho Chi Minh City, where Phan Van Tam, 38, is being treated, said on Thursday afternoon that the man has made encouraging improvements.

The patient can now breathe on his own while his heart, kidneys, and lungs have started functioning normally again.

“The necrotic tissues in the patient's right abdomen and right thigh have healed. It is expected that today the patient will be transferred to the tropical diseases department and continue to be monitored there,” Dr. Nguyen Qui Hung of the ICU said on Thursday.

Tam was bitten by a king cobra, which measured 2.5 meters long and weighed 4.6 kilograms, on August 19 while catching it in order to sell it for money to pay his children’s tuition.

The man was hospitalized in a critical condition with the venomous snake still grasped in his arm.

Many people have donated to help Tam’s family overcome their financial difficulty and cover his hospital fees.

Both he and his wife worked as day laborers to raise their two children.

Tam has been unable to work for some months as an accident had left him with a broken leg before the snakebite.

Upon his recovery, Tam expressed his gratitude to the doctors and nurses for saving him and to the people who have supported him and his family, doctors said.