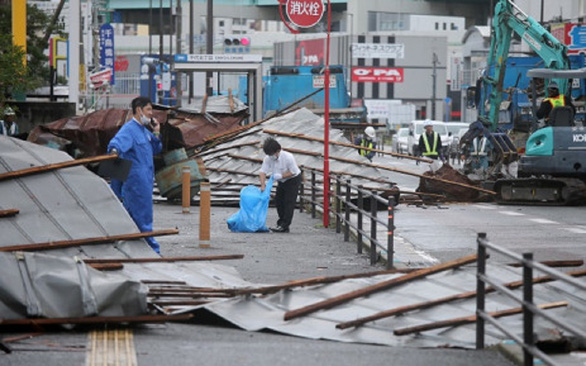 Vietnam’s representative office in Japan is closely coordinating with local authorities to search for two Vietnamese apprentices who went missing after Super Typhoon Haishen swept through the East Asian country earlier this week.

Typhoon Haishen, the tenth to hit Japan this year, caused a serious landslide in Higashi Usuki District in Miyazaki Prefecture early on Monday morning, according to the Vietnam Consulate General in Fukouka.

The landslide resulted in the missing of four people, including two Vietnamese interns.

The Vietnam Consulate General in Fukouka has worked closely with authorities in Miyazaki Prefecture and other relevant agencies of Japan to verify relevant information and speed up the search for the two Vietnamese citizens.

Preliminary information showed that they hail from the north-central Vietnamese provinces of Thanh Hoa and Nghe An, and work for Aioigumi JSC in Miyazaki Prefecture on Kyushu Island.

The Japanese government has directed local police and rescue forces to actively search for the victims, Vietnam’s Ministry of Foreign Affairs said on Tuesday.

The consulate general has been tasked with maintaining contact with Japanese authorities and the Vietnamese community in Japan to receive updates on the case, as well as preparing to implement citizen protection measures.

The foreign ministry has asked the Ministry of Labor, War Invalids, and Social Affairs and Departments of External Relations in Thanh Hoa and Nghe An to inform the victims’ families and ensure their full interests.

The Vietnam Consulate General in Fukouka had earlier issued warnings about Super Typhoon Haishen for the Vietnamese community on its website, as well as on websites and social media pages of Vietnamese organizations and associations in the region.

It has kept contact with Vietnamese nationals’ associations and groups, along with some businesses and schools in the areas to have a good grasp of their situation and urge them to take safety measures.

Typhoon Haishen swept through Kyushu Island early on Monday with wind speed at up to 160km per hour and gusts at 216km an hour.

As of Monday afternoon, at least 46 people in the Kyushu region were injured in the aftermarth of this typhoon.