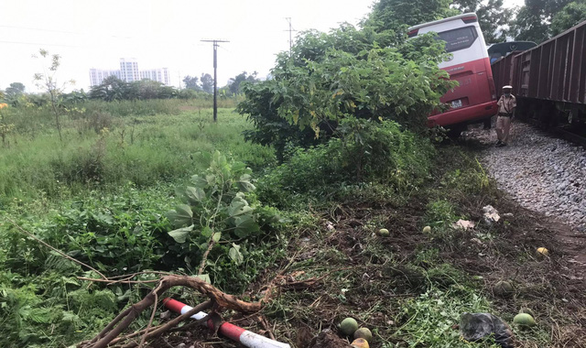 Several students were lucky enough to only suffer minor injuries when their school bus was hit by a cargo train in Hanoi on Tuesday afternoon.

The collision happened at around 4:00 pm at the intersection of Tay Mo Street and the railway in Nam Tu Liem District.

The 45-seater school bus, which was carrying more than 40 fourth-grade students from Ly Nam De Elementary School in the same district back to school after an extracurricular activity, was attempting to cross the railway but had to move backward as a truck in the opposite direction was blocking the way, according to a witness.

At that time, a cargo train on the tracks hit the school bus.

“The students on the bus screamed in panic and many people rushed to smash the windows of the bus to rescue the children,” said the witness.

Six students were slightly injured and rushed to Military Hospital 103, about 6.2 kilometers from where the collision occurred.

The six children had their health checked and have all been discharged from the hospital.

Meanwhile, rescuers and functional forces took other people on the school bus to a safe zone after the collision.

It is reported that there are no barriers or danger-warning signals at the intersection where the accident took place although local people have long proposed them.

Authorities are investigating the crash.