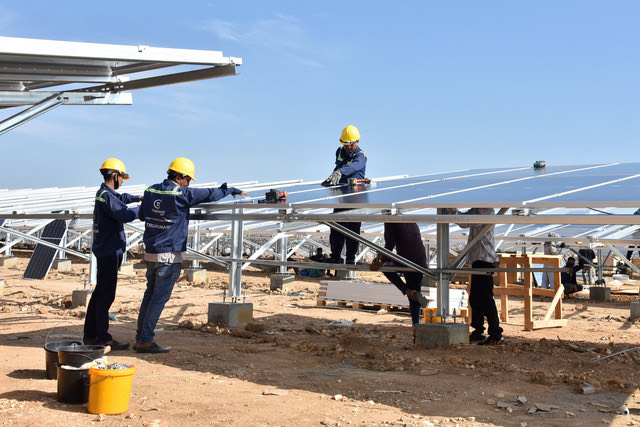 Vietnam has officially welcomed the newest and largest solar farm in Southeast Asia, the 450 MW Trungnam – Thuan Nam, as its grand opening ceremony took place on Monday on an area of 557 hectares.

Trung Nam Group, a leading renewable energy company in Vietnam, has invested more than US$517 million in the solar farm and its substations, as well as another $86 million for 17.5 kilometers of transmission lines for its project in Phuoc Minh Commune, Thuan Nam District, located in south-central Ninh Thuan Province.

Given policies to promote renewable energy on at national and provincial levels since 2018, the combined capacity of all projects in Ninh Thuan Province, the capital of renewable energy in Vietnam, has reached 2,000 MW.

As renewable energy growth exceeded expectations, the grid was actually overloaded up until recently.

While a solar farm can be completed within six months, a 220kv/500kV transmission line needs three to five years to finish.

By June 30, 2019, there had been 82 solar farms with a cumulative capacity of 4,464 MW, most of them located in Ninh Thuan and neighboring Binh Thuan Province, that were unable to be completely connected to the national grid.

Due to this, many projects had to cut their capacity by 30-35%, and some projects even had to reduce it to 60 percent, which was a tough decision for the power producers considering the loss in income.

Trung Nam Group was the first private company in Vietnam to be granted the permission to construct the 500 kV substation and the 220kv and 500 kV transmission lines to open up the highway for renewable energy from the solar farms to the national grid.

The move aims to end the cutback in capacity and help companies in the region save tens of millions of U.S. dollars each year.

Breaking ground in mid-May, the Trungnam - Thuan Nam solar farm was completed within 102 days with up to 8,200 workers on site during construction.

“When we chose to finish this solar farm in 102 days, we were playing with words to tell the world the story of our strong determination to overcome all challenges to complete the project," said Nguyen Tam Tien, CEO of Trung Nam Group.

“There was a point when we were in serious trouble when country’s borders were closed due to COVID-19 restrictions.

"Many of our technical experts and managers were stuck abroad.

"We had to charter flights to bring them in."

The 450 MW Trungnam – Thuan Nam solar farm has been producing energy for the national grid since September 30, days before its grand opening ceremony, and the whole system will be transferred to the Vietnam Electricity Group (EVN) for the price of zero dong.

It is expected to produce 1GW per year from 1.4 million solar photovoltaic cells and will contribute to the cleaner future of renewable energy that the Vietnamese government has committed itself to.