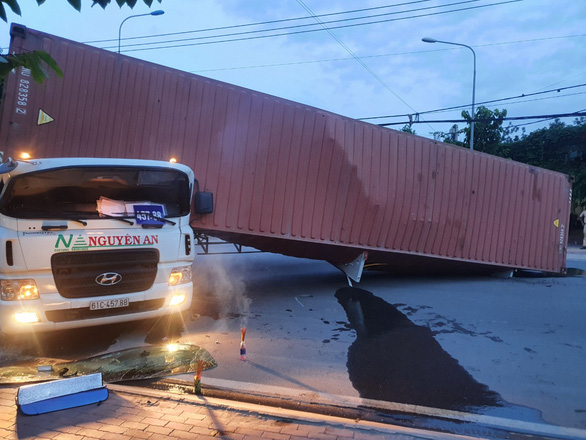 A shipping container on a truck suddenly overturned when the vehicle made a U-turn in southern Binh Duong Province, killing the driver sitting in the cabin.

Police in Thu Dau Mot City, which is the provincial capital, were investigating the accident, which took place on Friday on Le Chi Dan Street.

The victim was identified as Ha Quoc Thang, a 39-year-old man from Ha Tinh Province, located in north-central Vietnam.

According to onlookers, Thang was driving a tractor-trailer on Le Chi Dan Street in the early morning.

He then tried to make a U-turn after finding out he had gone into a wrong way.

As the long truck changed its direction on a narrow road, the shipping container lost its balance and turned on its side, crushing the truck cabin and killing the driver on the spot.

Police had cleared up the accident scene as of Friday afternoon.