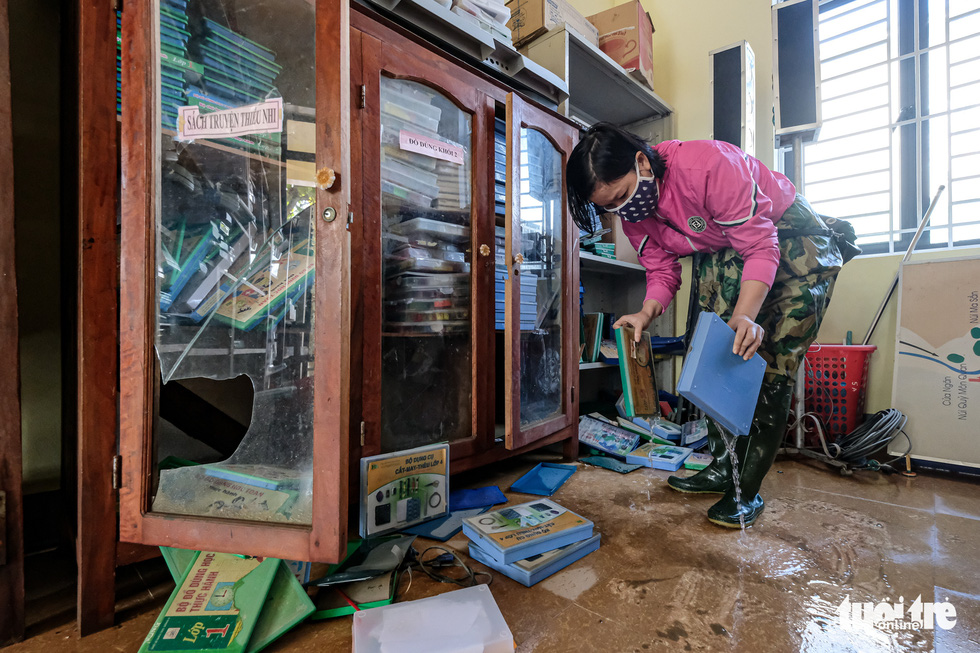 Schools in central Vietnam pick up the pieces after detrimental flooding

Teachers and students in flood-hit localities in central Vietnam are facing many challenges in returning to normal activities as most school facilities and properties have been severely damaged.

It is one of the five schools in Cam Xuyen District suffering major damage from the catastrophe.

From early Thursday morning, 30 teachers from various schools of the district gathered to help clean up Cam Quang in the hope of an early class resumption date.

Meanwhile, local soldiers had checked on the premises from Wednesday afternoon to help, yet they could not start cleaning as floodwater levels were still high, a source said.

As flooding had waned by Thursday morning, teachers of Cam Quang immediately got their hands on cleaning up the campus.

After working on her own house, which was one meter deep in floodwater, Cam Quang’s teacher Ho Thi Phuong Thao spared no time to return to the school.

“I felt antsy in my stomach, as most of my students came from poor households in rural areas. Their textbooks at home are soaked, so are the books at school. How can I find books for them to continue studying?" Thao pondered.

“Despite our school having its own share of work [after the flood], we still try to find time to help our neighboring school out with their cleaning so that their students can return as soon as possible,” he said.

Nguyen Thi Ha, vice-principal of Cam Quang Elementary School, told Tuoi Tre (Youth) newspaper that over 20 meters of barrier wall at the school was knocked down in the flood, while its office and library were all inundated.

Some documents and important paperwork were brought to storage and top shelves as instructed by the district’s Bureau of Education and Training.

However, desks and textbooks at Cam Quang were badly damaged due to the school’s underestimation of the catastrophe.

“It was perplexing to arrive at school [after the flood]. How can we find textbooks for the students to study?” Ha confessed.

Ha called on the support of benefactors to help with school supplies, textbooks, pens, and notebooks so that their students can resume study.

In Ha Tinh, many schools are cleaning up after the flood has receded to prepare for class resumption.

Preliminary calculations indicate that roughly 150 schools in Ha Tinh were submerged in floodwater, the majority located in the provincial capital of Ha Tinh as well as Cam Xuyen, Thach Ha, and Can Loc Districts.