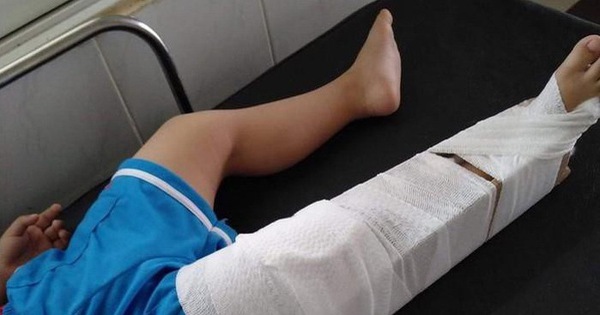 A kindergarten teacher in the southern Vietnamese province of Dong Nai has been suspended for breaking the leg of a three-year-old student.

The Office of Education and Training in Long Khanh City, Dong Nai Province confirmed on Thursday that it had temporarily suspended Pham Thi Thanh Thuy, a teacher at Hoa Mi Kindergarten.

The decision followed a report from the boy’s parent, Do Duy Tan, who stated that his three-year-old son – D.G.P. – had suffered a broken leg during class at the kindergarten.

Police officers later had a working session with the school board and P.’s teacher, Thuy.

Preliminary information showed that the incident happened at around 11:00 am on October 28, when P. and other students were having lunch.

As P. took too long to finish his meal, Thuy decided to hold him and feed him.

Thuy placed the boy’s right leg on her neck before he said that he was in pain.

The teacher then brought P. to the hospital for a check-up and an X-ray which revealed that the boy’s right thigh bone had been fractured.

Following the incident, P.’s family was informed and the boy was admitted to Children’s Hospital 1 in District 10, Ho Chi Minh City.

Dang Thanh Tuyen, principal of Hoa Mi Kindergarten, said that the school board had visited P., apologized to the family, and offered to pay the entirety of his medical expenses.

The family refused to accept the money and said they needed to focus on treating the boy first.

Thuy also extended her apologies to the parents by phone.