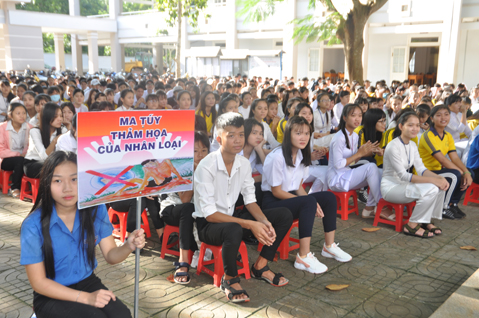 A teenage student from southern Vietnam was pregnant and gave birth to a baby with nobody, including her family, knowing about the entire procedure despite going to school every day.

D., a woman living in Da Bac Commune of Ba Ria-Vung Tau Province’s Chau Duc District who is the mother of the girl in question, found out about the situation only after hearing a baby’s cry while sleeping at around 4:00 am or 5:00 am on January 3.

At that time, T. was shocked to see her daughter, 15-year-old T., give birth to a baby girl weighing about 2.5kg.

T. and her baby were then taken to the local medical center for healthcare.

According to D., T. and her baby were weak, with the newborn having jaundice, as T. received no nourishment and proper care during her pregnancy.

D. said that she had divorced her husband and raised two children alone, of which T. is the oldest, born in 2006.

As D. often came home late after work, she did not have time to pay attention to her children.

T. is supposed to be in ninth grade at her age, but she is currently a seventh-grade student at Vo Truong Toan Middle School in Da Bac Commune after repeating two grades in elementary school.

The school management board and the teachers also failed to see the fact that T. was pregnant.

T. told D. the man who made her pregnant was a person she knows through social media.

Currently, although D. has yet to report the issue to local authorities, the Da Bac Commune police reported it to Chau Duc District’s police.

According to Tuoi Tre (Youth) newspaper’s research, the man T. mentioned hails from Suoi Nghe Commune in the same district and is working in Ho Chi Minh City.

On Tuesday, a leader of the Chau Duc Party Committee said that he had directed relveant departments to clarify the case and deal with it in accordance with the law, making it clear how the school and the teachers knew nothing about T.’s pregnancy.