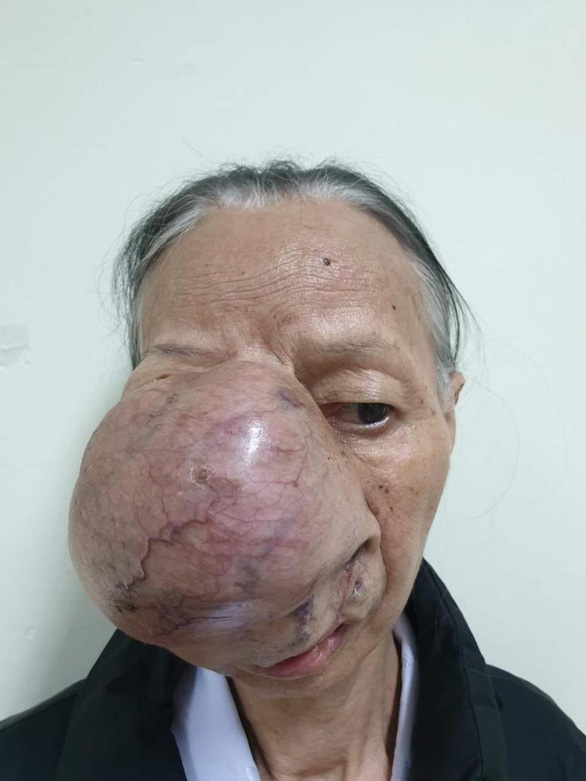 The lump started with a small mole on the 74-year-old female patient’s face six years ago, according to Dr. Vu Quang Vinh, director of the Center for Aesthetic and Reconstructive Plastic Surgery at the Le Huu Trac National Burn Hospital.

Dr. Vinh said that the type of tumor the patient encountered was a fibrous tumor, of which the incidence on the face is 0.05-0.5 percent.

The condition is also rarely found in Vietnam.

The patient had not sought treatment over her financial difficulty, with her husband exposed to Agent Orange and her two children dead.

Six months ago, the tumor began growing at a pace that posed a risk of life-threatening complications if the patient did not take medical treatment.

During a charity visit to the Vietnamese central region at the end of 2020, doctors discovered the patient’s situation and made donations for her treatment.

Following her hospitalization in December, the patient suffered cachexia -- a complex syndrome causing ongoing muscle loss that is not entirely reversed with nutritional supplementation.

The tumor had blocked an area of 12x14 cm on the right side of her face, compressing her nose, eyes, right jaw, causing nasal obstruction and loss of right eye vision, and pressing against the jaw, sinuses, and skull base.

In addition, her pre-existing conditions included hypertension and atrial fibrillation without any treatment.

The large size of the tumor endangered the base of the skull, presenting a threat of cerebrospinal fluid leakage.

The doctors thus were divided into two surgical teams to take out the tumor and process bones and teeth, and reconstruct the jaw and the face of the patient.

After five hours of surgery, they managed to remove the entire tumor, and shaped the face with the remaining bone structure and soft tissues.

The doctors are set to perform upper jaw bone shaping and implantation so that the patient can eat and chew better once her health condition improves.

On January 18, the patient was discharged from the intensive care unit and is expected to be released from the hospital in time to welcome the upcoming Lunar New Year festival, which falls on February 12.