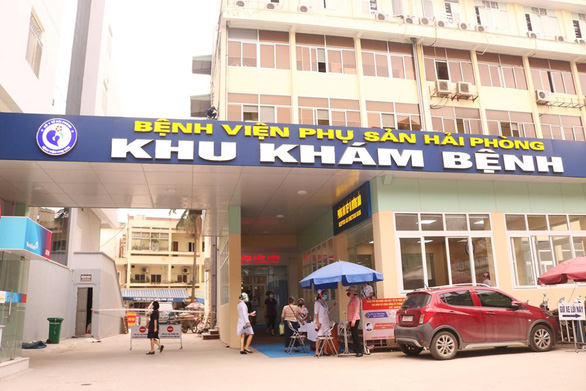 Hai Phong Hospital of Obstetrics and Gynecology in the namesake northern Vietnamese city has been placed on lockdown after a man taking care of his postpartum wife tested positive for COVID-19.

The hospital has stopped receiving new patients coming for health examination and treatment while beefing up control on people entering and exiting the institution, a leader of the Hai Phong Department of Health said on Monday evening.

All facilities at the hospital have also been disinfected.

The shutdown came after N.D.T., a man who took care of his wife -- a new mother -- at the hospital from January 23 to 27, had caught the viral disease and been registered as patient No. 1,833.

T. works at Vietnam Poyun Electronics Co. Ltd., which is located in northern Hai Duong Province and has also been locked down after a cluster of COVID-19 was detected last Thursday.

According to the man’s declaration, he went to the health examination clinic, the delivery room, the operation room, and stayed in room 607 of the six-story newborn center.

In addition, he also went to eat and drink and buy medicine at the pharmacy next to the hospital.

Medical authorities have traced direct and indirect contacts of T. and implemented such measures as quarantining and sampling all patients, their family members, medical staff members, and workers who are present at the hospital for COVID-19 testing.

The city’s Department of Health also said that it has directed other medical facilities to serve the maternity examination and treatment needs of the people in the coming days.

According to Dr. Vu Van Tam, director of the Hai Phong Hospital of Obstetrics and Gynecology, the number of patients, their family members, and medical staffers staying and working at the hospital are around 1,000 people.

The hospital is urgently working on screening and tracing possible COVID-19 cases.

Vietnam has documented 1,851 coronavirus cases, including 964 domestic infections, as of Tuesday morning, with 1,460 recoveries and 35 deaths, according to the Ministry of Health.

The country announced the first two local cases on January 28 after having gone nearly two months without any community-based infection.

A total of 271 domestic infections have been documented since then, according to the health ministry’s data.

The majority of the domestically-transmitted cases were linked to Hai Duong and Quang Ninh, both located in northern Vietnam.

The country confirmed 84 local transmissions on Thursday, 62 on Friday, 61 on Saturday, 31 on Sunday, and 32 on Monday.