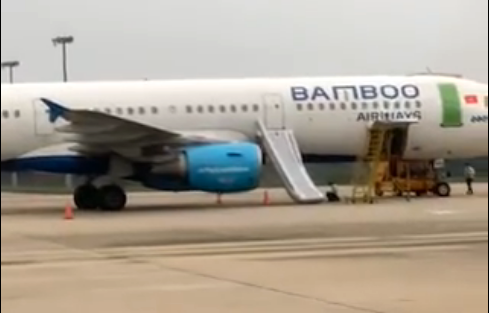 Vietnamese man fined for opening airplane emergency exit while aboard

A flight operated by Bamboo Airways was disrupted at an airport in central Vietnam on Thursday after a passenger on board opened the exit door and thus inflated the emergency slide on the aircraft.

The situation transpired on Bamboo Airways’ flight QH 1177, which was expected to depart Tho Xuan Airport in north-central Thanh Hoa Province for Ho Chi Minh City at 5:00 pm on Thursday.

Ater getting aboard, passenger V.V.D., 59, from Thanh Hoa, pulled the handle to open the exit door, which in turn activated the emergency slide on the side of the jet while it was waiting to take off on the runway.

Due to the incident, the Bamboo Airways flight crew had to steer the aircraft back to the terminal, causing the flight to be delayed for nearly two hours.

Explaining the incident to the Northern Airports Authority, D. said he mistook the exit door for the toilet entrance.

Tran Hoa Phuong, director of the Northern Airports Authority, who oversees all airports in northern Vietnam, said the agency has levied a fine of VND15 million (US$652) on D.

As prescribed in Decree 162 on administrative penalties for civil aviation offenses, unsolicited opening of airplane exit doors could be subject to a fine of VND10-20 million ($435-870).