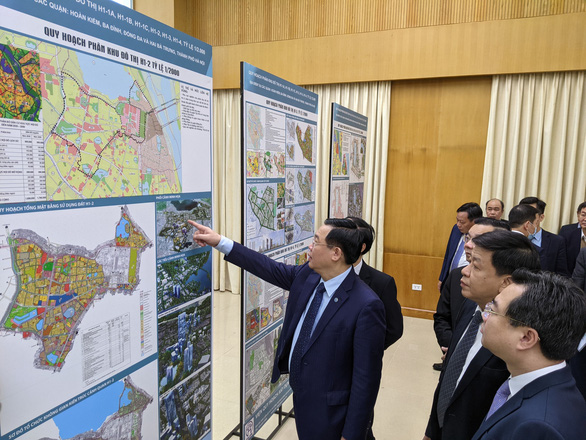 The Hanoi People’s Committee on Monday unveiled a master plan for the historical inner city area, including Hoan Kiem, Ba Dinh, Dong Da and Hai Ba Trung Districts, which will involve the relocation of as many as 215,000 local residents.

Pursuant to the plan, the population of the four districts must be decreased by 215,000 during the 2020-30 period, said Nguyen Trong Ky Anh, deputy director of the Hanoi Authority for Urban Planning and Architecture.

According to Anh, the master plan for the city’s core area has assigned distinct dispositions and functions for each neighborhood, including the Old Quarter, the French Quarter, the Hoan Kiem Lake area, and the surrounding area.

More specifically, the Hoan Kiem Lake is envisioned as an ancient urban area with historical and cultural values, in which structures for commerce, service, tourism operations as well as residential buildings and public infrastructures would be erected.

The Hoan Kiem Lake and its vicinity are seen as a major tourist attraction of Hanoi, where buildings for purposes of culture, administration, commerce, service, tourism as well as residential areas and historical, cultural and religious premises share the space.

The French Quarter, including the blocks in Hoan Kiem and Hai Ba Trung Districts, is considered a location with cultural, architectural and historical significance, with functions of historical and cultural sites, religious premises, villas, residential blocks, commercial and financial hubs, healthcare and other public services to be prioritized in the master plan.

The master plan also laid down regulations on building heights in the historical quarters, which prescribed that infrastructure in the Old Quarter, as well as the Hoan Kiem Lake and its vicinity, should not soar higher than 16 meters.

Meanwhile, buildings in the French Quarter should not have more than six floors or be higher than 22 meters.

Buildings in certain areas are also restricted to a height of 25 meters, or less than seven floors.

The redevelopment of the historical quarter would be implemented in accordance with the general master plan which was endorsed by the prime minister in 2011.

Earlier, Hanoi Party Committee secretary Vuong Dinh Hue pointed out that the 2011 master plan for the capital city only saw 86 percent completion in 2020, with most of the setbacks found in the Red River area, Duong River area, and four downtown districts.