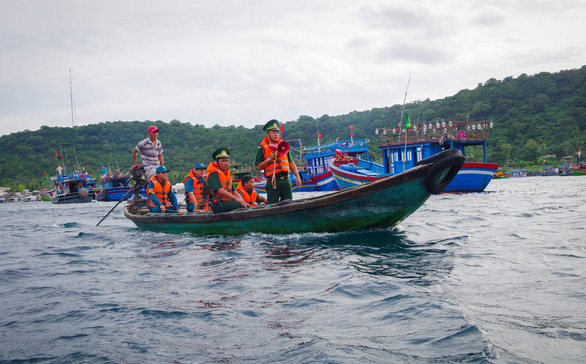 Border guards on Phu Quoc off southern Vietnam are put on standby as several new COVID-19 cases have been caught sneaking into the country via the island in the past few days.

On Friday, during a conference on COVID-19 safety regulations, Minister of Health Nguyen Thanh Long voiced concerns over the threat of the fourth coronavirus wave in the country, which calls for relentless prevention measures in each and every locale.

The Ministry of Health announced the same day seven new COVID-19 cases, three of whom were Vietnamese border jumpers who took a boat with seven others to Phu Quoc Island, administered by southern Kien Giang Province, on Monday before coming to other areas in Vietnam.

Despite local authorities' effort to patrol the Phu Quoc area, which is known as a major tourism hub of Vietnam, they are struggling to cover over 1,500 square kilometers of water surface with their limited resources and vehicles, the Military Command of Border Guard in Kien Giang stated.

Nguyen Luu Trung, deputy chairman of the Kien Giang People’s Committee, referred to a recent COVID-19 outbreak in Cambodia, which adjoins the province, as a mainspring of an increasing number of illegal entrants in the area.

So far, Phu Quoc officials have booked six illegal entrance incidents in 2021 with a total of 39 border jumpers caught.

Phu Quoc has been a favorite destination for border jumpers from Cambodia for years due to its proximity to Vietnam’s neighboring country.

On top of that, while the 56-kilometer land border between Kien Giang and Cambodia has been carefully monitored, there remains a certain gap in the sea entrances.

It is speculated that all six human smuggling attempts that Phu Quoc have seen this year are all linked to Cambodia-based rings.

Earlier this year, four Vietnamese women were caught using the service of two Cambodian racketeers, who charged them US$350 each, to be smuggled back to Vietnam by boat.

The two smugglers claimed that a large number of Vietnamese working in Cambodia were looking for repatriation, but they were choosing to evade compulsory quarantine for fear of exposing the illegitimate businesses that they were engaging in in the neighboring country.

Nguyen The Anh, chief of the Military Command of the Kien Giang Border Guard, confirmed that all Vietnamese border jumpers caught since 2020 in the area used the smuggling service of Cambodian rackets.

According to the Kien Giang Fisheries Association, the administration board has disseminated information on the severity of COVID-19 and issued a warning against illegal human transportation to over 4,000 members since the latest outbreak in Cambodia emerged in February.

Truong Van Ngu, a member of the association, said he has stopped giving acquaintances a lift from Phu Quoc Island to the mainland with his boat, as he fears getting into trouble and being fined by authorities.

“I can only earn as much as a few tens of millions of Vietnamese dong [VND10 million = $435), it’s not worth it to do illegal stuff, not to mention the lethal risks of community spread,” Ngu said.

Tran Van Ngay, a boat owner in Phu Quoc, said regulations for boats in the area have been tightened, as captains of a boat now must present the crew member list to the border guards before leaving or entering.

According to Flotilla No. 2 under the Kien Giang Border Guard, all border jumpers used motorboats to run along the coast of Cambodia before reaching Phu Quoc or Tho Chu Island of Kien Giang, as the route only stretches 20 kilometers.

Huynh Van Cuong, captain of a fishing boat that operates in Vietnam’s southwest waters, said he receives messages calling for cooperation in detecting illegal entrants from local authorities around 6:00 pm every day.

Regarding the illegal entrants that sneaked into the island on Monday, Phu Quoc authorities said they are scrambling to locate the seven remaining people on the boat, which include three alleged crew members.

By the end of Friday, Phu Quoc had completed scanning, contact tracing, and isolating 26 direct contacts of newly announced coronavirus cases, while the search for indirect contacts was still underway.

The city has also equipped local health officials with machines for COVID-19 testing to brace for the 'worst-case scenario' that could happen.

However, border guards are finding it hard to cover the 1,500 square meters of seas and 130 kilometers of coastline despite having mobilized the whole fleet of patrol boats, according to Senior Colonel Nguyen The Anh of the Kien Giang Border Guard.

Smuggling rings are turning more deceiving, as they have started hiding people in blind spots under the deck to evade scrutiny, Anh added.

Vietnam has recorded a total of 2,590 COVID-19 cases, with 2,308 recoveries and 35 virus-related deaths as of Sunday morning, according to the Ministry of Health's data.