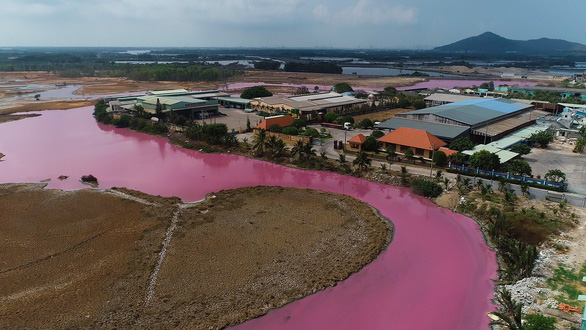 Residents of Phu My Town in the southern Ba Ria – Vung Tau Province on Thursday woke up to the nearby reservoir turning bright pink after changing multiple colors in the previous days.

The bizarre hue of water, accompanied by sickly smells, was seen at the lagoon that connects to the sewer gate no. 6 at Tan Hai Commune of Phu My Town, the locals reported.

Since March 20, the lagoon has gradually changed from its original black color to yellow, then purple before reaching its current state of bright pink.

The color change in the lagoon is jeopardizing hundreds of fishery households in Long Son Commune of Ba Ria – Vung Tau, as once the sewer gate No.6 is open, the putatively toxic discharge will flow to the Cha Va River, threatening damage to the fish and oyster cage farms located downstream.

It is also revealed during investigation that Dai Quang, a fish processing facility in the locale, has been continuing operation despite having their license revoked earlier.

The firm will be forced to close in the near future, authority of Phu My Town claimed.

This is not the first time the lagoon has changed color, as it also turned pink once in 2017.

According to officials, many fishery processing factories used to be situated along the lagoon, excreting toxic discharges that caused mass fish death on the Cha Va River.

Ba Ria – Vung Tau authority has since forced the polluting workshops to move out of the locale, only leaving ones that meet environmental standards in place, yet the situation still recurred.