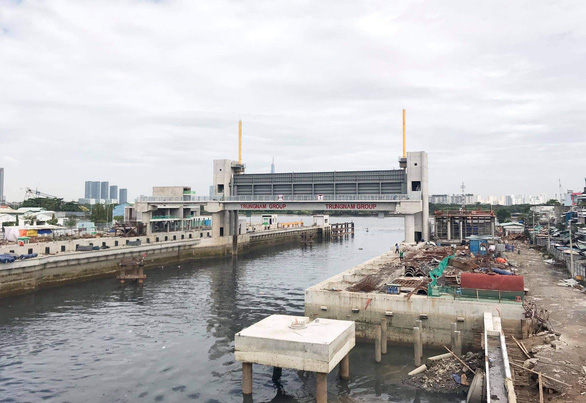 The Vietnamese Prime Minister on April 1 endorsed Resolution 40, which calls for the restart of the suspended tidal flood control project in Ho Chi Minh City.

The resolution prompts immediate solutions to speed up the project for tidal flood control with consideration to climate change in the southern metropolis.

Allocated with a budget of VND10 trillion (US$435 million) from investor Trungnam Group, the project saw 90 percent completion when it was paused in December 2020 due to disputes in annex contracts among stakeholders.

Despite negotiation efforts from the investor as well as authority officials, the conflict remains in gridlock, causing the project to be delayed up until now.

The Prime Minister requested that the Ho Chi Minh City People’s Committee take full legal responsibility in ensuring the progress of the project.

The city authority is also instructed to pay the dues for the investors and weed out unnecessary overhead costs from the project’s expenditure.

Regarding capital investment, the Ho Chi Minh City People’s Committee must reach agreement with the State Bank of Vietnam and the Bank for Investment and Development of Vietnam (BIDV) on refinancing the project in the coming months.

The Prime Minister also ordered the city leaders to screen and fix legal conundrums that the project is facing.