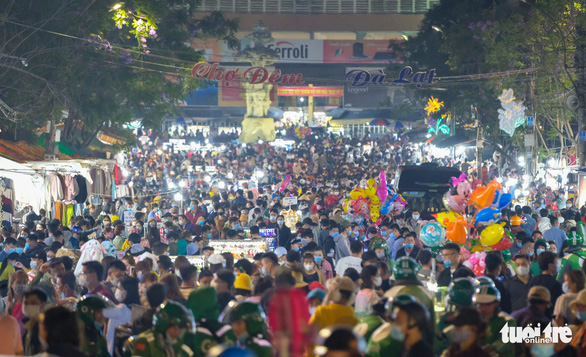 Vietnam’s contact tracing efforts have found a COVID-19 patient visiting a popular tourist destination near a public holiday that ended early this week.

The patient is coded 3,141, a 27-year-old man from Bac Ninh Province, the Department of Health of Lam Dong Province, located in Central Highlands, said in a contact tracing report on Saturday night.

At least 179 people have been identified as his close contacts, according to the report.

The patient was recorded as a coronavirus infection on Saturday morning.

The patient visited Da Lat, which is a touristic place and Lam Dong's capital, from May 2 to 5 after arriving in Cam Ranh, which is near the famous beach city Nha Trang in south-central Vietnam, from Hanoi aboard flight VN1595 taking off at 4:05 pm on May 1.

On May 2, the patient caught a long-haul bus from Cam Ranh to Da Lat and stayed there until May 5, when he flew back to Hanoi on board flight VN1572, which departed at 8:30 am.

Contact tracing is still underway, while his identified contacts have been quarantined and tested for COVID-19 following regulations.

Vietnamese celebrated a public holiday from April 30 to May 3 inclusive, as tens of thousands of people came to touristic destinations like Da Lat, Vung Tau, Nha Trang, and Da Nang.

Vietnam has recorded 241 local infections since April 27, after having spent about a month detecting zero community cases. Nine hospitals have been isolated for their links to many of these cases.

Bac Ninh, in the north, accounted for 43 of the infections, including 31 added on Saturday alone.

Vietnam has confirmed a total of 3,230 local and imported cases since the virus first emerged in the country on January 23, 2020, according to the Ministry of Health's data.

Recoveries have hit 2,602, including 42 announced on Saturday, while virus-related deaths have remained at 35 for months.

The Southeast Asian country has vaccinated more than 800,000 people with AstraZeneca shots since mass inoculation first started on March 3.

A medical worker died on Friday of anaphylaxis, a severe, life-threatening allergic reaction that occurs rarely post-vaccination, after being injected with an AstraZeneca dose one day earlier, the Ministry of Health announced the same day.

This has been the first and only coronavirus vaccine-related fatality so far in Vietnam.

The country is now using only AstraZeneca shots to inoculate its population after having received almost one million doses via purchase and the COVAX vaccine-sharing scheme to date.