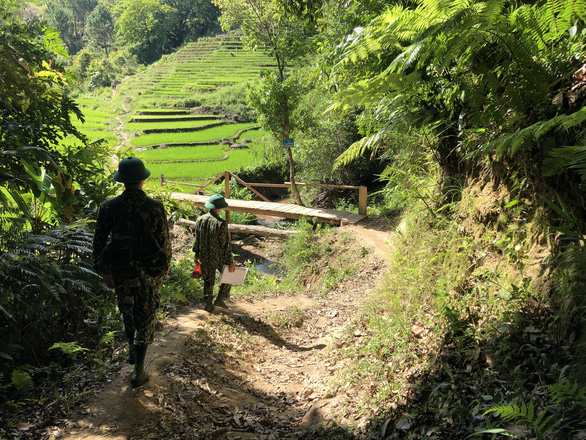 A group of six Vietnamese border jumpers were caught trying to sneak into Vietnam on Sunday evening through the country’s border with Laos.

Authorities in Nam Giang District, Quang Nam Province, where the interception happened, are waiting for the results of COVID-19 tests on the six illegals, A Viet Son, chairman of the Nam Giang People’s Committee, told Tuoi Tre (Youth) newspaper on Monday.

The group consists of four ethnic Hmong individuals who hail from the northern province of Lai Chau, including Sung A Tung, 35, Chau A Khai, 25, Lua A De, 33, and Sung A Pao, 43.

Meanwhile, the two others are To Thi Huyen and Doan Van Minh, who come from Quang Nam and neighboring Da Nang, respectively.

The group admitted that they were part of a herbal medicine smuggling operation.

While the four Hmong people headed to Laos to source the herbs, Minh and Huyen procured the harvest and shipped it back to Vietnam.

As Vietnam is tightening border security to minimize the risk of COVID-19 infection from border jumpers, Quang Nam authorities have set up scores of control posts along its border with Laos, helping detect various cases of illegal entry.

The majority of border jumpers found in the area are herbalists from northern Vietnam who smuggle medicine across the Vietnam-Laos border, a local official stated.

Vietnam has sealed its borders since March last year but it still grants entry to diplomats, foreign experts, and Vietnamese repatriates.

The country requires all arrivals from outside the country to undergo different forms of quarantine to stem COVID-19 spread.

Many border jumpers have been found trying to sneak into the nation to duck such quarantine over the past few months.

The daily spike in local cases of Vietnam has reached 109 as of Monday afternoon, beating the record of 92 patients reported on Sunday, according to the Ministry of Health.

Vietnam has confirmed 442 domestic cases in 26 provinces and cities since April 27, after it had gone about a month detecting zero infections in the community.

The country has documented 3,444 local and imported COVID-19 infections as of Monday afternoon, with 2,602 recoveries and 35 deaths, according to the ministry’s statistics.

The Southeast Asian country has administered 851,513 out of its stock of 917,600 AstraZeneca vaccine doses, the health ministry said in a report on Monday morning.

Those vaccinated are medical staff and other frontline workers.